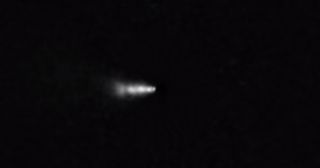 A jet of plasma spews from the center of a galaxy. Knots of material in the jet create a "string of pearls" look. Observations over 20 years by the Hubble Space Telescope captured two of those knots colliding.
(Image: © NASA, ESA and E. Meyer STScI)

It's a collision of cosmic proportions: A video from the Hubble Space Telescope shows two chunks of material smashing together inside a jet of plasma emanating from a monster black hole.

The new time-lapse video features the galaxy NGC 3862, which has a massive plume of material spewing out of its center. Twenty years of observations of NGC 3862 by the Hubble telescope show knots of material moving outward through the plume, making it look like a string of pearls. At one point, two of the knots collide with each other, causing them to brighten.

"Something like this has never been seen before in an extragalactic jet," Eileen Meyer, a postdoctoral researcher at the Space Telescope Science Institute (STScI), who assembled the video, said in a statement from NASA. [The Strangest Black Holes in the Universe]

Because the knots will continue to brighten in the coming decades as they merge, the phenomenon will give scientists "a very rare opportunity to see how the energy of the collision is dissipated into radiation," Meyer added.

Scientists think jets like this one are made mostly of plasma (electrically charged gas) and emanate from a monster black hole at the center of a galaxy. But according to NASA, these jets are poorly understood, and they may move the plasma from the nucleus of the galaxy in which the black hole is embedded.

While jets of this kind have been observed before, what makes this observation rare is that scientists can observe motions within the jet in optical light, far away from the black hole.

It appears that the knots within the jet are moving at different speeds. This may be because the first few knots push away the gas around the black hole, making a clear path behind them for subsequent knots. Those later knots would then experience less drag than their predecessors, and move faster away from the black hole.

The resulting collision creates a shock that emanates from the jets, which are traveling close to the speed of light. Astronomers can use these collisions to learn more about how much energy the jets are bringing out from the galaxies from which they originated.

Meyer is now creating two more Hubble videos of other jets, to search for similar motions.

The results of the study were published May 28 in the journal Nature.