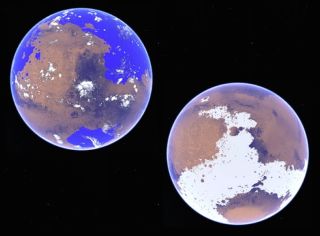 New research suggests that ancient Mars, rather than being warm and wet (top, left), was more of an icy snowball.
(Image: © Robin D. Wordsworth)

Crashed comet lander Philae phones home. A dead satellite falls to Earth. Mars shows both methane-laced meteorites and a possibly icy past, and the moon's dust gets a source in the best of this week's space news.

June 14 the Philae Comet Lander broke a long silence by calling in after crash-landing last year.  It can only send data when in communication with the Rosetta spacecraft orbiting the comet, so managers hope to move Rosetta closer to grab more consistent measurements. [Full story: Philae Rises! What's Next for Rosetta's Comet Lander?]

Researchers found trapped methane in fragments of volcanic rock from Mars that fell to Earth as meteorites, hinting that the Red Planet could be friendly to microbial life. [Full story: Methane in Mars Meteorites Suggests Possibility of Life]

A new planet, which orbits a red dwarf star along with two others, is around half the size of Earth and one-fifteenth its weight — the lightest known exoplanet in a stellar orbit. Researchers pinned down the planet's size by watching its gravitational interactions with its neighbors and star. [Full story: Alien Planet Is Smaller Than Earth and Surprisingly Light]

The Tropical Rainfall Measuring Mission satellite, launched in 1997, fell out of orbit and burnt up in the atmosphere on June 16 — and at least 12 pieces may have continued down to Earth as debris. [Full story: NASA Satellite Falls Out of Space, Burns Up Over Tropics]

A cloud of dust shrouding the moon likely came from constant collisions with comet particles, according to data gathered by NASA's Lunar Atmosphere and Dust Environment Explorer. The spacecraft counted 140,000 hits by particles of dust over its 80 days of observation in lower-altitude orbit, and researchers suspect all airless bodies collect such a covering. [Full story: The Moon's Puzzling Dust Cloud Finally Yields an Answer]

Early Mars may have been frigid, not warm

New research suggests that Mars' famous channels could have been sculpted billions of years ago by ice and snow rather than flowing water. 3D atmospheric models generated features more similar to modern-day Mars when dialed to cold and icy instead of warm and temperate, as previous research has suggested. [Full story: Red Planet, Icy World? New Picture of Ancient Mars Emerges]