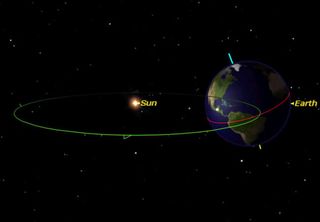 Dads everywhere will celebrate Father's Day today (June 21), and the Earth is joining the fun this year with the summer solstice, kicking off the first day of the northern summer.

At 12:38 p.m. EDT today (1638 GMT), the sun will reach that point where it will appear to shine farthest to the north of the equator, over the Tropic of Cancer, thus marking the summer solstice. The height of the midday sun has been getting progressively higher since Dec. 21 (the winter solstice), as its direct rays have been gradually migrating to the north.

The sun's height above the horizon at noontime is 47 degrees higher now, compared to six months ago. (As always, your clenched fist held at arm's length covers about 10 degrees of the sky. At midday, the sun will now appear nearly "five fists" higher in the southern sky as compared to Dec. 21st.) [Solar Quiz: Do You Know Our Sun?]

At one minute past the summer solstice (by 12:39 p.m. EDT), the sun will have already begun its southward migration back across the sky. The sun will cross the equator at the autumnal equinox, passing into the Southern Hemisphere, on Sep. 23, at 4:21 a.m. EDT (0821 GMT).

Today in Lewiston, Maine, for instance, as the sun crosses the meridian at 12:42 p.m. EDT, it will attain its highest point in the sky for this entire year, standing 70 degrees above the southern horizon. Since the sun will appear to describe such a high arc across the sky, the duration of daylight is now at its most extreme, lasting 15 hours and 29 minutes for Lewiston.

Daylight lasts longer are more northerly latitudes; less at more southerly latitudes. North of the Arctic Circle, for instance, the sun now remains above the horizon 24/7 (providing the so-called "midnight sun" effect). On the other hand, at the equator days and nights are equal, lasting 12 hours (a circumstance there that lasts all year long).

So if you're celebrating Father's Day with dad today, be sure to wish him a very Happy Summer Solstice, too!