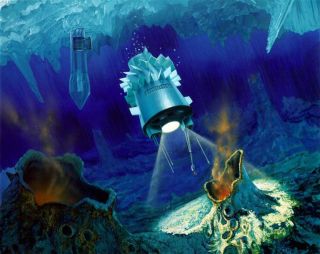 An artist's impression of a torpedo-shaped cryobot having penetrated through Europa's ice layer and released a probe into the ocean below.
(Image: © NASA/JPL)

A robotic "cryobot," designed to tunnel down through thick ice caps and penetrate subterranean seas, is undergoing tests on the Matanuska glacier in Alaska. It paves the way towards one day exploring the underground oceans of Jupiter's moon, Europa, or other icy moons of the Outer Solar System.

Europa is back on the menu for exploration. NASA's budget for the 2016 fiscal year includes about $30 million for further development of the Europa Clipper concept, a mission to Europa that will seek possible signs of the icy moon's habitability. However, being potentially habitable is not the same as being inhabited. To find life, a mission will ultimately have to land on the surface and go under the ice to the ocean below. Europa Clipper, if and when it launches sometime around 2025, will carry out reconnaissance of the surface for safe and scientifically interesting places to land. Crucially, however, the Clipper will not be carrying a lander with it.

"Assuming Europa is found to be potentially habitable, the next mission that follows may be able to land and perhaps try to get beneath the ice," says Louise Prockter, a planetary scientist at Johns Hopkins University Applied Physics Laboratory and Pre-Project Deputy Scientist for the Clipper mission. [Photos: Europa, Mysterious Icy Moon of Jupiter]

The challenge of getting underneath the ice on Europa is a daunting one, according to Prockter. First, any cryobot would have to tunnel down through 20 to 30 kilometers (12.4 to 18.6 miles) of ice. Even the thinner areas might still be several kilometers thick.

"One major challenge is how such a probe would be able to communicate to the surface once it starts to descend," she says. "The cryobot would also need to be able to withstand significant pressures underneath the ice. We're still a long way from having the technology to do that."

Bill Stone reckons otherwise. An experienced explorer, caver and engineer, as well as the founder of Stone Aerospace — a company that designs robots and vehicles to explore frontiers here on Earth, increasingly with an eye towards space – Stone heads back out to the Matanuska glacier this summer with his team of explorers and scientists to continue testing the most advanced cryobot in the world. Named VALKYRIE (Very deep Autonomous Laser-powered Kilowatt-class Yo-yoing Robotic Ice Explorer) and funded by NASA's Astrobiology Science and Technology for Exploring Planets (ASTEP) program, this cryobot uses lasers and fiber optics to cleanly melt its way through the ice.

In 2003, Stone Aerospace received NASA funding for DEPTHX, DEep Phreatic THermal eXplorer, an autonomous robot designed to explore underwater sinkholes but with the potential to one day explore Europa's ocean. DEPTHX used glass fiber optics to transmit data using five watt laser diodes, but Stone realized that far more laser power could be transmitted through those fibers, up to a theoretical limit of 4.6 mega-watts.

"It was like a lightbulb went off," says Stone. "So I wrote a proposal to NASA."

Previous cryobot designs carried their power source inside them, so the amount of energy they could generate was severely limited by their size and mass. However, VALKYRIE has the advantage of being able to leave its power source on the surface and transmit the energy via a laser down an optical fiber just microns wide. Currently, VALKRYIE works with a 5 kilowatt laser, but the power needed on Europa would be between 250 kilowatts and a megawatt, estimates Stone.

The cryobot uses the laser energy to heat water with which to melt the ice in front of it, while the water re-freezes behind it around the fiber, allowing communications and power flow to be maintained. In 2014 VALKYRIE descended to a depth of 31 meters into the Matanuska glacier, but that's definitely not the limit of its abilities, says Stone.

"We've been doing a 5 kilowatt test only because of budget limitations," he says. "I can build, today, a 250 kilowatt laser-powered cryobot. It would cost more money but we could illustrate it in Antarctica and show that we can go through kilometers of ice."

VALKYRIE would only be one part of the mission architecture. Once it breaks through the bottom of the ice crust, there is the task of exploring the ocean. Stone Aerospace also has this covered with DEPTHX and their latest autonomous underwater vehicle, ARTEMIS (Autonomous Rover/airborne-radar Transects of the Environment Beneath the McMurdo Ice Shelf), which is a prototype for an underwater mothership that could deploy smaller 'marsupial' probes to explore such areas of interest as hydrothermal vents. ARTEMIS is the primary vehicle in a NASA/ASTEP project named SIMPLE: Sub-ice Investigation of Marine and Planetary-analog Ecosystems. [Jupiter's Icy Moon Europa: Best Bet for Alien Life?]

The underground ocean is not the only region of interest on Europa. In 2013 the Hubble Space Telescope found evidence that geysers of water vapor are erupting from Europa's south pole, similar to the water vapor eruptions emanating from Saturn's moon Enceladus.

"The plumes have not yet been confirmed, but if they are then they would be a fantastic destination for some kind of in-situ experiment," says Prockter. "Though it might be risky landing next to an active vent."

Stone agrees that dropping onto or even into a vent is risky, but VALKYRIE's versatility comes to the rescue.

"The idea is to land at some safe distance, and then use the cryobot to do the equivalent of directional drilling," he says. "If you got to Texas where they are drilling for oil, they can collect the oil laterally from kilometers away, and we want to do the same thing with the cryobot and steer off the vertical descent line and maneuver over and detect the sources of the geysers."

In the meantime, Stone and his team continue to fine-tune their prototypes. The goal this year for VALKYRIE is to incorporate a protein fluorescent cytometer, which is a life-detecting instrument that looks for ultraviolet backscatter to detect the presence of microbes deposited in the ice of the Matanuska glacier. Meanwhile, ARTEMIS heads to Antarctica's Ross Ice Shelf in October 2015 to map the underside of the ice shelf in a briny underwater sea to provide data for calibrating Europa Clipper's ice-penetrating radar.

Perhaps, one day in the not too distant future, VALKYRIE, DEPTHX and ARTEMIS will be doing it for real in the ice and water of Europa.