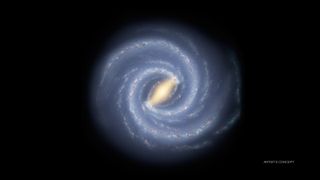 Mapping our Milky Way galaxy is a mind-bending challenge; from the inside looking out, astronomers have to spot the galaxy's stars all jammed together and cloaked in dust. But a new view of our galactic home is helping refine that map by charting more than 400 clusters where new stars are born.

The Milky Way galaxy is generally thought to contain four large spiral arms of the brightest, newest stars; older stars that have migrated outward fill the gaps between the arms. Our sun lies about two-thirds of the way out from the center on an outcropping called the Orion Spur.

The new study, based on data from NASA's Wide-Field Infrared Space Explorer (WISE) mission, allows astronomers to refine their image of the Milky Way. It supports the four-armed layout and added seven new clusters of young stars to the total found within WISE's data, many of them in the Perseus arm. The clusters are helpful for defining the galaxy's shape, because they consist of stars that formed in the dense arms and haven't yet had time to move away. [The Milky Way: Our Galactic Home in Photos]

"Spiral arms are like traffic jams in that the gas and stars crowd together and move more slowly in the arms,” Denilso Camargo, a researcher from the Federal University of Rio Grande do Sul in Brazil and lead author of the recent paper, said in a statement. "As material passes through the dense spiral arms, it is compressed, and this triggers more star formation."

From 2009 to 2011, WISE orbited the Earth and measured infrared wavelengths coming from the universe, the perfect method to cut through the galactic dust and reveal the layout of the galaxy’s underlying stars. Now, the telescope hunts for asteroids as part of a new mission, NEOWISE, but the old galactic data are still a font of information about the positions of stars.

The arms' overcrowding can also be spotted by other means, such as radio telescopes that detect dense clouds of gas. In WISE's case, data from an earlier ground telescope narrowed down the clusters' sizes and positions within the spiral arms. Every instrument aimed outward at the galaxy helps clarify its makeup and shape, and these groups of stars caught at the beginning of their lives are a valuable resource.

The research was detailed in the May 20 edition of the Monthly Notices of the Royal Astronomical Society.