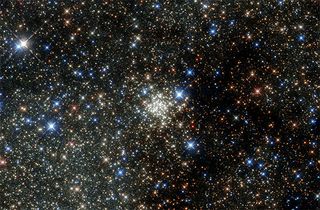 The Arches Cluster is located about 25,000 light-years from Earth in the constellation of Sagittarius (The Archer), close to the heart of our galaxy, the Milky Way. It is, like its neighbor the Quintuplet Cluster, a fairly young astronomical object at between two and four million years old.
(Image: © NASA/ESA)

On Wednesday, President Barack Obama mentioned something curious in a tweet. It wasn't about the Affordable Care Act, it wasn't concerning national security and wasn't part of the climate change conversation. Instead, it was a message about the cosmos.

"This was a fun briefing: My science advisor just showed me this Hubble shot of the most crowded place in our galaxy," wrote the President, with a dazzling Hubble Space Telescope observation of the Arches Cluster, located some 25,000 light-years away toward the center of our galaxy, attached.

President Obama is a well-known advocate for the sciences, STEM and science outreach, but this tweet didn't focus on a specific policy or the White House Science Fair, this was just a guy (who happens to be the leader of the United States), looking up in wonder. [President Obama and NASA: Presidential Photos]

The story behind the tweet became apparent on Thursday morning when the President's Chief Science Advisor John P. Holdren issued a White House statement. It just so happens that this particular observation, which was a part of an "ad-hoc" note he sent to White House staff, resonated with the President.

"Today's morning report from NASA contains a Hubble photo I thought worth sharing," Holdren wrote in the White House briefing. "The astonishing density of stars — most of which, we now know, have planets — really does make one wonder whether there's anybody else out there. And this is just one piece of our own galaxy. There are an estimated 100 billion other galaxies in the observable universe. Enjoy!"

The Hubble Space Telescope is still going strong 25 years after it was launched by Space Shuttle Discovery's crew in 1990 and this observation of the densely-packed stars in the Milky Way's core is just one of the million images taken by Hubble to date. But how densely packed is this star cluster?

"The Arches cluster is so dense that in a region with a radius equal to the distance between the sun and its nearest star there would be over 100,000 stars! At least 150 stars within the cluster are among the brightest ever discovered in the Milky Way," Holdren added.

The observation in question was released by NASA and the European Space Agency on May 29.

As noted by Holdren, it's images like these that really put things in perspective, and makes us question our place in the universe and whether there is life elsewhere. Astronomy is a profound science; it has the ability fire-up our sense of wonder and question our very existence. By looking into the furthest-most reaches of the universe, we are actually seeking answers to questions we didn't know we had about our own existence. Humanity can be very myopic, we only really care about what's happening down here on this tiny speck of life-giving sand, but the possibilities the universe provides makes us want to push the envelope, to look out further, to explore.

I have little doubt that small-minded politically-blinded individuals will criticize the President's wonderment at this particular Hubble image — after all, who has time to be dazzled by one of the most mindbogglingly beautiful and overwhelming portraits of our Milky Way's core, the light from which took 25,000 years to reach Earth, when they've got a country to run? But as the White House has shown us, even the most powerful governments have the ability to look up and ponder the universe.

If only more world leaders would do the same. We all live in the same tiny biosphere in a minute region of a spiral galaxy containing around 400 billion stars and many more planets — a little bit of perspective would go a long way.