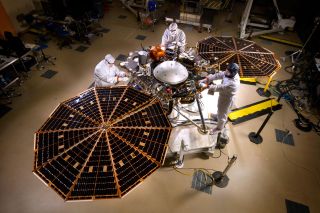 The solar arrays on NASA's InSight Mars lander are deployed during an April 30, 2015 test inside a clean room at Lockheed Martin Space Systems in Denver. InSight is scheduled to launch in March 2016.
(Image: © NASA/JPL-Caltech/Lockheed Martin )

NASA's next robotic Mars explorer has been put together and is now undergoing testing ahead of its launch next year.

Engineers at Lockheed Martin Space Systems have finished building NASA's InSight Mars lander and have begun testing the spacecraft, to make sure it can handle the rigors of launch and the harsh environment of deep space, space agency officials said.

"The environmental testing regimen is designed to wring out any issues with the spacecraft so we can resolve them while it's here on Earth," Spath added. "This phase takes nearly as long as assembly, but we want to make sure we deliver a vehicle to NASA that will perform as expected in extreme environments."

The seven-month test program will expose InSight to powerful vibrations, extreme temperatures and various air-pressure regimes, to ascertain how the lander will perform during launch, during the long cruise to Mars and on the Red Planet's surface, NASA officials said.

"It's great to see the spacecraft put together in its launch configuration," InSight project manager Tom Hoffman, of NASA's Jet Propulsion Laboratory in Pasadena, California, said in the same statement.

"Many teams from across the globe have worked long hours to get their elements of the system delivered for these tests," he added. "There still remains much work to do before we are ready for launch, but it is fantastic to get to this critical milestone."

The $425 million InSight mission — whose name is short for Interior Exploration using Seismic Investigations, Geodesy and Heat Transport — is scheduled to blast off in March 2016 and arrive at the Red Planet that September.

After it touches down, the car-size InSight lander will use several different science instruments to study the Martian crust, mantle and core. The mission's data should help researchers better understand the interior structure of Mars and shed light on how rocky planets in general form and evolve, NASA officials have said.

NASA also plans to launch two tiny CubeSats along with InSight, to help relay data to Earth during the spacecraft's entry, descent and landing sequence. The two Mars Cube One (MarCO) spacecraft won't end up orbiting the Red Planet but will continue journeying through deep space after InSight lands.