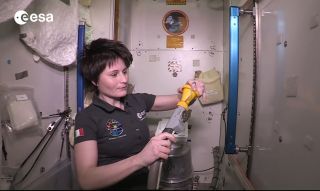 Astronauts aboard the International Space Station will return later than expected, a Russian cargo craft may have failed due to a problem with the rocket that launched it into space, and a British pop singer changes her tune on a trip into orbit. Here are Space.com's top stories of the week.

After the loss of the Russian cargo ship Progress 59, NASA and its international partners decided to delay the return trip of Terry Virts, Anton Shkaplerov and Samantha Cristoforetti until June. The three astronauts have been aboard the International Space Station since November. [Full Story: Space Station Crew's Earth Return Delayed by Russian Spaceship Crash]

Cause of Russian spacecraft crash uncovered

A too-early separation from the third stage of the Soyuz rocket may have caused the loss of the Russian space agency's Progress 59 spacecraft, which burned up in Earth's atmosphere May 7 after a failed attempt to deliver supplies to the International Space Station. [Full Story: Russian Space Cargo Ship Crash Blamed on Soyuz Rocket]

Pop singer Sarah Brightman was scheduled to make a self-funded trip to space this September aboard a Russian Soyuz spacecraft. But, on May 13, the singer announced the trip had been postponed "for personal family reasons." [Full Story: Singer Sarah Brightman Changes Her Tune on Space Mission]

The future of space exploration may lie in a tentacled, amphibious "squid rover" or one of 14 other new and ambitious technology concepts that the NASA Innovative Advanced Concepts (NIAC) program recently funded. [Full Story: NASA Funds 'Squid Rover,' 14 Other Far-Out Space Tech Ideas]

Cubesats, or tiny satellites built from blocks that are only 4 inches on each side, are collecting data from orbit around the Earth. Now they're being sent into deep space. [Full Story: Tiny Cubesats Set to Explore Deep Space]

Sorry, but there is no NASA warp drive

Despite recent Internet rumors that NASA researchers were on the verge of developing a propellant-free thruster system, the space agency has said that the actual work is still conceptual and "has not yet shown any tangible results." [Full Story: No Warp Drive Here: NASA Downplays 'Impossible' EM Drive Space Engine]

The company that says it plans to build a human settlement on Mars by 2027 responded to accusations that its astronaut-selection process was based largely on the level of financial investment in the company by the applicants. [Full Story: Mars One Execs Dispute Criticism of Red Planet Colony Mission]

How astronauts 'go' in space

Italian astronaut Samantha Cristoforetti showed the world the potty aboard the International Space Station, in a new video. The suction fan is apparently so loud that everyone on board knows when it's being used. [Full Story: In Space, Everyone Can Hear You Poop | Video]

Should we stop cracking jokes about Uranus?

Science communicator and space enthusiast Ariel Waldman argues that silly jokes about the seventh planet from the sun can get in the way of people actually learning about this awesome place. [Full Story: Uranus Is a Cool Place, But Jokes Make It the 'Saddest Planet' (Video)]

Researchers at the NASA Goddard Space Flight Center are looking for gamma- rays radiated by dark matter as it circles the drain of a black hole. Such a signal could shed light on the nature of this otherwise invisible material. [Full Story: Black Holes Might Make Dark Matter Shine]

Are the seas salty on Europa?

Researchers think the beautiful reddish-brown lines that streak across the surface of Jupiter's moon Europa could be radiation-blasted salt from an underground sea. [Jupiter Moon Europa's Dark Lines May Be Salt from Underground Sea]