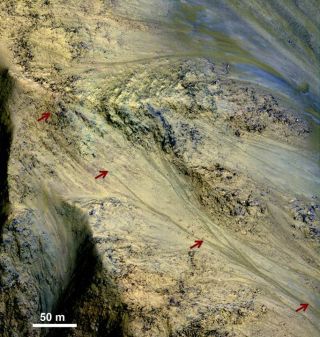 Features called recurrent slope lineae (RSL) have been spotted on some Martian slopes in warmer months. Some scientists think RSL could be seasonal flows of salty water. Red arrows point out one 0.75-mile-long (1.2 kilometers) RSL in this image taken by NASA’s Mars Reconnaissance Orbiter.
(Image: © NASA/JPL-Caltech/Univ. of Arizona)

These dark flows have been observed on Mars at low and middle latitudes. RSL's are a type of feature that creep down some Martian slopes in warmer months and then fade away in cooler months. Scientists conjecture that RSL's may be seasonal flows of salty water.

Indeed, new research reveals the prospect that NASA's Mars rover Curiosity may be within range of active slope processes that resemble RSL, possibly caused by liquid water. But what caution should be taken in investigating an RSL feature – in terms of planetary protection of Mars? Are they the best place to search for extant (existing) Martian life? [The Search for Water on Mars in Photos]

In the journal Icarus, an article will appear this July titled "Slope activity in Gale crater, Mars" and is already available online via now available via Icarus in press.

The paper is authored by Colin Dundas, a planetary scientist at the U.S. Geological Survey's Astrogeology Science Center at Flagstaff, Arizona and Alfred McEwen, of the University of Arizona, principal investigator for the super-powerful High Resolution Imaging Science Experiment onboard NASA's Mars Reconnaissance Orbiter now circling the Red Planet.

"High-resolution repeat imaging of Aeolis Mons, the central mound in Gale crater, reveals active slope processes within tens of kilometers of the Curiosity rover," the scientists report. "At one location near the base of northeastern Aeolis Mons, dozens of transient narrow lineae were observed, resembling features (Recurring Slope Lineae) that are potentially due to liquid water. However, the lineae faded and have not recurred in subsequent Mars years."

Dundas and McEwen state they have not identified confirmed RSL at Gale crater. The researchers note that it has been recommended by astrobiology specialists that RSL "be treated as potential special regions for planetary protection."

Furthermore, repeat images acquired from above as Curiosity wheels toward the base of Aeolis Mons could spot changes due to active slope processes, "which could enable the rover to examine recently exposed material," Dundas and McEwen add.

"There is no strong evidence for RSL in Gale," McEwen told Inside Outer Space.

However, let's say that Curiosity — or a future lander/rover — does face an RSL situation. What should be done given planetary protection concerns?

It's McEwen's opinion to drive up to it and monitor an RSL from as close as possible, he said. The robot is armed with science gear to take a look, he said, particularly using the ChemCam instrument suite to provide remote compositional information using the first laser-induced breakdown spectrometer (LIBS) on a planetary mission.

RSL occur on greater than 25 degree slopes, McEwen advised, "so the rover isn't going to contact an RSL."

"The planetary protection is a huge issue especially as we keep finding more and more RSL sites," now up to 172, said David Stillman, a scientist at the Southwest Research Institute in Boulder, Colorado.

Stillman's Mars research, for instance, has taken him to an RSL site in Valles Marineris, suggesting that it is recharged by an aquifer. The total amount of water liberated from the area equals 8 to 17 Olympic-sized swimming pools, he said, and the only way to annually recharge such a large volume of water is via an aquifer.

Stillman told Inside Outer Space that it is very interesting that the RSL-like features at Gale only occurred after the MY28 dust storm.

"While we didn't even know what to look for in MY28 [Mars Year starting in mid-June and ending in early December 2007], we luckily imaged many RSL sites," Stillman said. Nearly all of them, he said, had many more individual RSL and the RSL were much longer.

"We have a theory that the dust storm actually produced a slight greenhouse effect that increased subsurface warming," Stillman concluded.

For more information on the Dundas and McEwen Icarus paper, visit:
http://www.sciencedirect.com/science/article/pii/S0019103515001372

Leonard David has been reporting on the space industry for more than five decades. He is former director of research for the National Commission on Space and is co-author of Buzz Aldrin's 2013 book "Mission to Mars – My Vision for Space Exploration," published by National Geographic, with a new updated paperback version available. Follow us @Spacedotcom, Facebook or Google+.