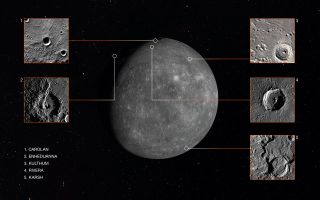 This image of Mercury shows the locations of five craters and their new names. Image released April 29, 2015.
(Image: © IAU/NASA/MESSENGER)

Just hours before NASA's MESSENGER spacecraft was expected to crash onto the surface of Mercury, ending the probe's four-year observation of the rocky planet, the winners of a contest to name five new craters on Mercury were announced.

The five winning crater names are: Carolan, Enheduanna, Karsh, Kulthum and Rivera. The names were selected by the public outreach team for the spacecraft out of thousands of submissions to an open competition that closed in January. MESSENGER, which captured stunning images of Mercury's cratered surface, crashed into the surface of the planet at at 3:26 p.m. EDT (1926 GMT) yesterday (April 30).

The new crater names have been approved by the International Astronomical Union (IAU). The rules of the IAU state that Mercury features must be named after an artist, composer or writer who was famous for more than 50 years and died at least three years ago. [Farewell, MESSENGER! NASA Probe Crashes Into Mercury]

The selection came from more than 3,600 initial submissions and a semifinal list of 17 names. Anyone in the world could make entries, up to Jan. 15. These are the people who the craters were named after and the people who submitted those names:

NASA held another crater naming contest for Mercury, in 2013.