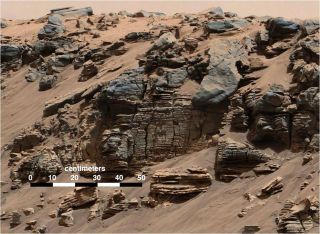 The image is from ‘Hidden Valley’ in Gale Crater on Mars. Very fine-grained sediments, which slowly fell down through the water, were deposited right at the bottom of the crater lake. The sediment plates at the bottom are level, so everything indicates that the entire Gale Crater may have been a large lake.
(Image: © NASA/JPL, MSSS)

A research team has published some intriguing work in the journal Nature Geoscience regarding transient liquid water and water activity at Gale crater on Mars – the exploration zone of NASA's Curiosity rover.

They report the observations support the formation of night-time transient liquid brines in the uppermost 5 centimeters of the subsurface that then evaporate after sunrise. There is an active exchange of water at the atmosphere/soil interface.

What's that mean for microorganisms on Mars?

The team explains that the water activity and temperature are probably too low to support terrestrial organisms.

While the potential for liquid water has now been found, it is not likely that life will be found on Mars. The Red Planet it is too dry, too cold and the cosmic radiation is so powerful that it penetrates at least one meter into the surface and kills all life … at least life as we know it on Earth, adds team member, Morten Bo Madsen, associate professor and head of the Mars Group at the Niels Bohr Institute at the University of Copenhagen in an Institute press statement.

Perchlorates are widespread on the surface of Mars, the research team explains, "and we expect that liquid brines are abundant beyond equatorial regions where atmospheric humidity is higher and temperatures are lower."

In supplemental research published online April 13 in Nature Geoscience, the scientists point out that — given the strong oxidative character of perchlorate ions and their by-products — their presence could cause "corrosive interaction" of brines with spacecraft materials.

Indeed, Curiosity wheels show significant damage at Gale crater. That damage may be compared with corrosion in aluminum by different salts, the researchers suggest.

The anodized protection of the aluminum wheels may protect just the upper few nanometer layers of the wheels, but the abrasion may wear out the external protecting layer and expose the internal aluminum to corrosion.

"The presence of chloride and perchlorate anions in brines may add stress to the aluminum wheels through pitting corrosion of this or other future Martian exploration platforms," the research team concludes.

For detailed information on this work and supplemental information, visit:
http://www.nature.com/ngeo/journal/vaop/ncurrent/full/ngeo2412.html