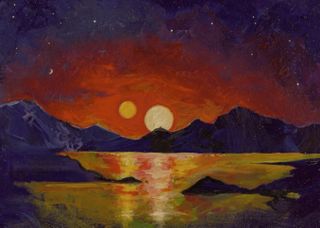 NASA's MESSENGER probe is nearing the end of its mission orbiting Mercury, but the intrepid spacecraft isn't quite done yet. NASA officials performed a series of maneuvers with MESSENGER to boost its orbit and hopefully delay its planned impact into the planet's surface, which is expected later this year. [Full Story: NASA Mercury Probe Trying to Survive for Another Month]

GRAIL on the moon

While spacecraft and even people have soured the surface of the moon for decades, hunting for new features, NASA's GRAIL (Gravity Recovery and Interior Laboratory) mission discovered another, huge crater. Officials have (temporarily) named it for aviator Amelia Earhart. [Full Story: Ancient Moon Crater Named After Amelia Earhart]

NASA astronaut Scott Kelly, one of two crewmembers now spending a year on the International Space Station, is warming up to his new home nicely. Kelly flew up to the station last Friday (March 27), but since then, he's settled into his new life and even feels at home on the space station. [Full Story: NASA Astronaut Already Feels at Home in Space as 1-Year Journey Begins]

Scientists now think that maybe Tatooine, Luke Skywalker's fictional home world in "Star Wars," may not be unique in the real Milky Way. Researchers have found that Earthlike worlds with two suns might actually be widespread in the cosmos. [Full Story: Rocky 'Tatooine' Planets with 2 Suns May Be Common]

Nations around the world launched a bunch of rockets last week. In total, countries launched a total of eight rockets in six days for a variety of different reasons. The United States, Russia, Japan, India and other countries made it a serious week for rockets. [Full Story: Wow! 8 Rocket Missions Launched in 6 Days Last Week]

Although this may not be news, we here at Space.com love our science fiction. In that spirit, we've compiled our favorite sci-fi and space books of all time in this handy list. Please let us know what you think! [Full Story: Best Space Books and Sci-Fi: A Space.com Reading List]

Scientists have long-known that the moon runs deep with lava tubes, but research now suggest that those lunar lava tubes might actually be huge enough to hold full cities. If humans ever try to colonize the moon, using those caves could actually be a boon to settlement, providing shelter from space rock impacts and even radiation. [Full Story: Lunar Lava Tubes Might Make Underground Moon Cities Possible]