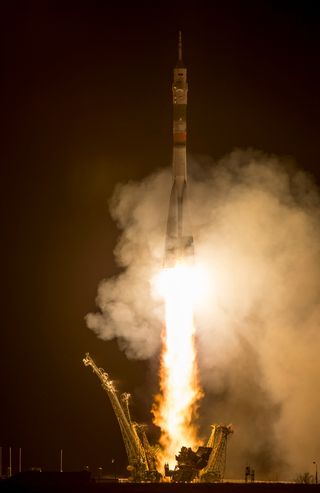 Two spaceflyers blasted off on the first-ever yearlong mission to the International Space Station, NASA announced its plan to haul a boulder from a near-Earth asteroid to lunar orbit and yet more ingredients for life were found on Mars. Here's a look at Space.com's top stories of the week.

The science of the yearlong space station mission

Science experiments conducted on the International Space Station during the orbiting outpost's first yearlong mission could help open the door to deep space for NASA. [Full Story: A Year in Space: The Science Behind the Epic Space Station Voyage]

NASA opts to pluck a boulder, not grab a whole asteroid

Nitrogen was available on ancient Mars in a form that microbes could have used to build key biomolecules, and atmospheric carbon monoxide has been a feasible energy source for life throughout the Red Planet's history, two new studies suggest. [Full Story: More Ingredients for Life Identified on Mars]

Jupiter may have acted like a giant wrecking ball in the newborn solar system, roaming in to destroy an early generation of inner planets before retreating to its current orbit, researchers say. [Full Story: Jupiter's 'Smashing' Migration May Explain Our Oddball Solar System]

Measurements taken by NASA's Cassini spacecraft have shown that Saturn might have a longer day than originally calculated from measurements taken by the Voyager 2 probe more than 20 years earlier. [Full Story: Length of Saturn's Day Measured Like Never Before]

New observations may finally reveal the identity of a mystery object circling around the monster black hole at the center of our Milky Way galaxy — or not. [Full Story: New Evidence May Identify Mystery Object at Milky Way Galaxy's Core]

Europe's Philae spacecraft, which made the first successful soft landing on a comet last year before going silent, hasn't responded yet to hails from its orbiting Rosetta mothership. [Full Story: On Comet, Philae Lander Still Silent as Europe Keeps Listening]