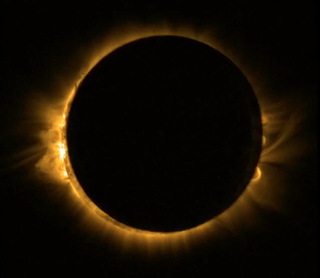 The European Space Agency's Proba-2 satellite snapped this photo of the March 20th 2015 total solar eclipse over a northern region of the globe.
(Image: © ESA/ROB)

A stunning solar eclipse wowed spectators, powerful green auroras appeared on St. Patrick's Day, it was the 50th anniversary of the first spacewalk, and "Christmas lights" were seen on Mars. It's been a busy week in space news; here are Space.com's picks for the best space stories of the week.

Up north, a total solar eclipse

Day was turned briefly into night in some parts of the world on Friday (March 20) when a total solar eclipse passed through the sky over the north Atlantic and Arctic Oceans. A partial eclipse was visible in Europe, northern Asia and northern Africa. [Full Story: Spectacular Total Solar Eclipse Kicks Off First Day of Spring (Photos, Video)

A powerful solar stormbombarded the Earth's atmosphere with supercharged particles on Saint Patrick's Day (March 17). The storm was not a threat to satellites or astronauts in space, but it did pose a threat to GPS and radio signals on Earth. [Full Story: St. Patrick's Day Solar Storm Bombards Earth, Sparks Auroras]

Plans for the first manned trip to Mars have been delayed. The Mars One private colonization project has pushed the scheduled launch date of its first manned mission to the Red Planet back by two years, to 2026. The company says the delay is due to a lack of investment funding. [Full Story: Mars One Colony Project Delays Manned Red Planet Mission to 2026]

Competition heats up for space-bound cargo

The Sierra Nevada Corporation is making a strong bid to be the next private company to send cargo-carrying space planes to the International Space Station for NASA. NASA's current, billion-dollar cargo contract is held by SpaceX and Orbital ATK. NASA has already solicited proposals for the next round of cargo deliveries, which will start in 2018. [Full Story: Sierra Nevada Unveils Cargo Version of Private Dream Chaser Space Plane]

On March 18, 1965, Russian cosmonaut Alexei Leonov became the first person to exit a spacecraft and "walk" in the vacuum of space. It was later learned that this first extravehicular activity (EVA) nearly ended in tragedy. [Fully Story: EVA at 50: Cosmonaut Alexei Leonov Took 1st Spacewalk 50 Years Ago]

Making a home on Uranus' Moons

Living on a gas giant planet like Uranus would be extremely difficult, but making a home on its two largest moons, Titania and Miranda, is not inconceivable. Check out the newest installment of our series by Space.com contributor Joseph Castro on what it would be like to live elsewhere in the solar system. [Full Story: What It Would Be Like to Live on Uranus' Moons Titania and Miranda]

On March 17, 2013, a massive space rock slammed into the moon, creating one of the brightest explosions ever observed on the lunar surface. Using an algorithm that looks at "before-and-after" photos of the moon's surface, scientists have finally identified the crater left behind by this explosive collision. [Full Story: Moon Crater from Giant Lunar Crash in 2013 Finally Found (Video)]

Leading up to Christmas Day, 2014, the Martian atmosphere was aglow with a celestial version of Christmas lights: a bright display of auroras, not unlike those seen on Earth near the North and South Poles. The light show was spotted by NASA's MAVEN spacecraft (short for Mars Atmosphere and Volatile Evolution). [Full Story: Aurora 'Christmas Lights' on Mars Spotted by NASA Spacecraft]

The Mars rover Curiosity's onboard laboratory has sprung a leak: some of the chemicals meant for testing the composition of soil samples have filtered out of their containers. But as those loose chemicals reacted with the soil samples, researchers back on Earth found evidence of organic material. [Full Story: Leak in Mars Rover Curiosity's Wet Chemistry Test Finds Organics]