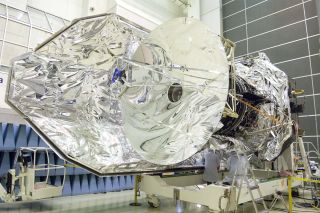 The European Space Agency's Herschel Space Telescope was able to examine the far-infrared light of star-forming regions until it was retired in 2013.
(Image: © ESA)

Earth's water has a mysterious past stretching back to the primordial clouds of gas that birthed the Sun and other stars. By using telescopes and computer simulations to study such star nurseries, researchers can better understand the cosmic chemistry that has influenced the distribution of water in star systems across the Universe.

Much water takes the form of the familiar chemical formula H2O with two hydrogen atoms and one oxygen atom. But some water also takes the form of the less familiar "heavy water," known as deuterated water with the chemical formula HDO. That ratio of H2O to HDO represents a unique signature that can reveal the history of water within star nurseries, the clouds of gas that eventually spawn star systems and their respective planets.

"The HDO/H2O ratio is a very important tool, as it keeps memory of the water formation conditions and mechanisms," says Audrey Coutens, a postdoctoral researcher in astrophysics and planetary science at the University of Copenhagen in Denmark. [Gallery: Strange Nebula Shapes, What Do You See?]

The new study aimed to shed new light on high-mass star formations by looking at how the water ratios changed within high-mass star-forming regions such as G34. Doing so required ground and space telescopes capable of detecting the light signatures of water and other chemicals in G34 at a distance of 11 light-years from Earth.

Perhaps the most crucial telescope data came from Europe's Herschel Space Telescope, which ended its scientific mission in 2013. As a space observatory, Herschel was able to look at the far-infrared light of distant star-forming regions unfiltered by Earth’s atmosphere. The telescope was able to observe water and other chemical molecules in space based on their light emissions by using the HIFI spectrometer— an instrument that can detect the light wavelengths and display them as spectral lines representing the "fingerprints" of each molecule.

By using both Herschel and ground telescopes, the team detected 10 HDO spectral lines (used to derive the HDO abundance) and three H218O spectral lines (used to derive the H2O abundance). Some of the lines didn't need much energy to get excited and mainly gave off their telltale signatures in the colder regions of G34. Others required higher temperatures in the inner, warmer region of G34 to reveal their signature.

"To determine the water distribution, it is therefore important to have a lot of lines with different excitation levels to probe the different regions," Coutens says.

The researchers compared the observations from the telescopes with their own chemical computer simulations of the G34 high-mass star-forming region. Such simulations assumed that G34 has a roughly spherical shape with an inner hot core that has the highest density and temperature, which sits inside a larger, colder envelope.

"In reality, it is probably more complex than a simple sphere," Coutens says. "But it helps us to have an idea of how water is distributed in these types of high-mass sources."

"We see a decrease of the HDO/H2O ratio in the inner regions compared to the outer regions," Coutens says. "It is the first time that this trend has been shown in a high-mass source."

Still looking to the stars

The findings involving G34 could boost scientific understanding of the interstellar chemistry that creates water in high-mass star forming regions. It has also helped refine the simulations used to predict water distribution among the stars. Still, researchers still need to look at more examples of similar regions to make sure that G34 represents the norm for high-mass star nurseries rather than an exception.

Luckily, there is no shortage of information from both space observatories and ground instruments at the moment. Coutens and her colleagues have access to data from five to six other high-mass star nurseries collected by the Herschel Space Telescope's HIFI spectrometer before the space telescope was retired.

"We have other HIFI observations of HDO towards a few other high-mass star forming regions, but the radiative transfer modeling is quite time-consuming," Coutens says. "So we need more time to know if this trend is also present in these sources."

There are alternatives to examining the water distribution in the warm, inner regions of star nurseries. Such work could be done by the powerful arrays of interferometer antennas at the ALMA telescope facility in Chilean Andes, or the Plateau de Bure Interferometer in the French Alps.