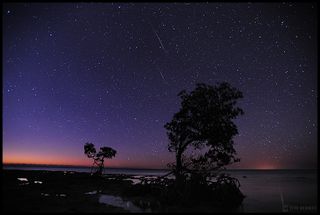 Despite what the groundhog says, winter is on it's way out. February 4 is the mid-winter mark for the northern hemisphere, and the days are steadily growing longer. Photographer Jeff Berkes captured this winter sky image in the Florida Keys in January 2012, during the annual Quadrantid meteor shower.
(Image: © Jeff Berkes)

As most weather-minded people know, Feb. 2 is Groundhog Day.

According to folklore, if the weather is cloudy when a groundhog emerges from its burrow on this day, the furry creature will leave its den, signifying that winter will soon end.

If, on the other hand, the day is sunny, the groundhog will "see its shadow" and retreat back into its burrow, and winter will continue for six more weeks. [See the Seasons Change from Space]

Today is also Candlemas, or the middle of the winter season, halfway between the December solstice and the March equinox. Candlemas was once regarded as the first of the four "cross-quarter" days of the year. The actual winter midpoint will occur on Wednesday, Feb. 4, at 6:24 a.m. EST (1124 GMT).

Although the altitude of the Sun has been slowly climbing, and the length of daylight has been increasing since the winter solstice on Dec. 21, changes in the length of the days have been relatively subtle. The altitude of the midday sun has only increased by 7 degrees (less than the width of your fist held at arm's length) since the winter solstice.

Here's an example: On the first day of winter in Boston, sunset occurred at 4:15 p.m. EST (2115 GMT) and the length of daylight (from sunrise to sunset) reached a minimum of 9 hours and 5 minutes. On Wednesday — winter's midpoint — the Sun will set at 5:01 p.m. EST (2201 GMT) with only 61 additional minutes of daylight having accumulated since Dec. 21.

But as an old and true New England proverb notes, "As the days lengthen, the cold strengthens." And as most people who live in the northern and eastern United States will attest to this week, the thermometer appears to be reluctant to respond to the increasing solar altitude.

It's in the second half of winter that the effects of the northward shift of the Sun's direct rays start becoming much more noticeable. In fact, by Mar. 20 — the date of the vernal equinox — the length of daylight will have increased by 2 hours and 5 minutes since Feb. 4. And the midday altitude of the sun will have climbed more than 16 degrees higher than it is now.

Lastly, because daylight saving time begins on Mar. 8 this year, by Mar. 20, the sun will be setting just a few minutes shy of 7 p.m. EST (midnight GMT).

Interestingly, for many northern locales, long-term records indicate the first four days of February are the coldest of the winter. But average daily temperatures rise rapidly thereafter, so that by the last week of the month they are higher than any day in January. Meteorologists, in fact, consider that the winter season is over at the end of February. "Meteorological winter" is defined by the three coldest months of the year: December, January and February.

So for all those winter-weary souls, take heart: In the days and weeks to come, there will be greater amounts of daily sunlight, the more northerly position of the afternoon sunsets will be visible on the horizon and soon the weather will correspond to the increased sunlight.

So, take heed that the northern hemisphere is about to turn the corner, both astronomically and meteorologically. And regardless of what your local groundhog or woodchuck might say, spring is well on its way!