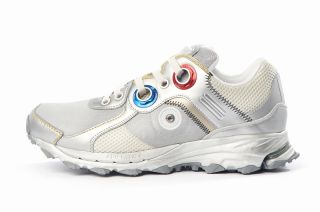 Aspiring astronauts take note: If you have ever desired to take a "space walk," Adidas will soon have the sneakers for you.

The German sports outfitter is set to launch two new pairs of trainers that feature the look and feel of NASA's historic spacesuits this summer.

"Inspired by vintage astronaut suits and backpacks, [with] molded and machined details similar to authentic [NASA] closures, zippers and straps are added," Adidas described in a statement. "Shiny versus matte distressed materials complete the look of outer space." [Evolution of the Spacesuit in Photos]

With names like "Response Trail Robot" and "Ozweego Robot," the astronaut-appropriate sports shoes incorporate design elements from NASA's pressurized garments. The sneakers include silver tones and stitching reminiscent of the iconic Mercury astronauts' silver spacesuits, as well as red and blue lace eyelets modeled after the umbilical inlets on the front of the Apollo moon suits.

The two "Robot" models differ in colors and materials, and how they are secured. On the "Ozweego Robot," white is more dominant than silver, and the lace crosses over the front of the shoe and then passes under a fabric loop, as opposed to feeding through an eyelet.

The spacesuit-inspired sneakers come out of an on-going collaboration between Adidas and Raf Simons, a Belgian high fashion designer and the creative director at Christian Dior. Part of the "Raf Simons x [by] adidas Originals" fall/winter 2015-16 collection, the new trainers will launch into select Adidas retailers and boutiques in July.

Prices for the Raf Simons collection are expected to range from $455 to $730 per pair.

This isn't the first time that the Adidas brand has crossed into space. The company cited "the great achievements of Soviet cosmonauts during the 1960s" when designing the uniforms for Russia's 2014 World Cup team.

And during the 1990s, Russian cosmonauts wore Adidas-brand "sports boots" — sneakers — aboard the Mir space station.

Other shoe companies have also turned to NASA and its astronauts for design ideas in the recent past. Nike styled special edition sneakers after space exploration, including partnering with moonwalker Buzz Aldrin for footwear that evoked his own famous footprints on the lunar surface.

Aldrin also worked with General Electric to introduce "The Missions," a moon boot-inspired sneaker highlighting the GE-developed advanced materials that were used in the Apollo spacesuits. Limited to 100 pairs, the shoes quickly sold out last year on the 45th anniversary of the Apollo 11 launch.

Click through to collectSPACE.com to see Adidas' other spacesuit-inspired sneaker, the "Ozweego Robot."