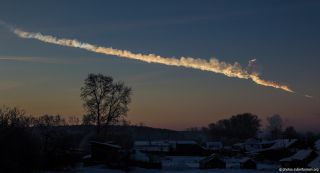 Trail of the object that exploded over Chelyabinsk, Russia, in 2013.
(Image: © Alex Alishevskikh CC BY-SA 2.0 via http://www.flickr.com/photos/alexeya/)

What should humanity do the next time a space rock threatens Earth? European officials recently spent two days figuring out possible ways to respond to such a scenario, with the aim of drawing up effective procedures before the danger actually materializes.

The first-of-its-kind simulation considered what to do if an asteroid similar to, or larger than, the one that exploded over Russia in February 2013 — which was about 62 feet (19 meters) wide — came close to Earth. Officials focused on activities ranging from 30 days to 1 hour before a potential impact.

"There are a large number of variables to consider in predicting the effects and damage from any asteroid impact, making simulations such as these very complex," Detlef Koschny, head of near-Earth-object activities at the European Space Agency's Space Situational Awareness office, said in a statement. [Potentially Dangerous Asteroids (Images)]

"These include the size, mass, speed, composition and impact angle," he added. "Nonetheless, this shouldn't stop Europe from developing a comprehensive set of measures that could be taken by national civil authorities, which can be general enough to accommodate a range of possible effects."

The 2013 Russian meteor explosion, which occurred above the city of Chelyabinsk, helped to bring the asteroid threat into a new realm of public awareness. The shockwave created by the airburst injured 1,500 people; the vast majority were cut by shards of flying glass after windows were shattered.

The European authorities performing the new simulation, which took place in late November, took a lesson from the Chelyabinsk event, determining that it would be best to warn the public to stay away from windows and stay in buildings' most secure areas — similar to the advice given during tornadoes.

Officials considered what to do if Earth were threatened by an object between 39 feet and 125 feet wide (12 to 38 m) traveling at 28,000 mph (45,000 km/h). ESA and related warning agencies would need to work quickly, they determined, and coordinate with civil protection authorities to give information about where and when the asteroid would likely strike, and what effects would be anticipated.

"For example, within about three days before a predicted impact, we'd likely have relatively good estimates of the mass, size, composition and impact location," Gerhard Drolshagen, of ESA's near-Earth-object team, said in the same statement. "All of these directly affect the type of impact effects, amount of energy to be generated and, hence, potential reactions that civil authorities could take."