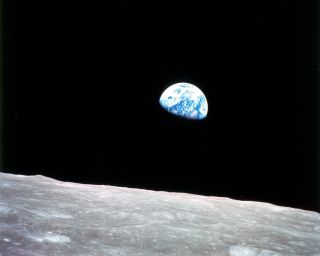 Astronauts have celebrated Christmas in space since the first manned mission to the moon, Apollo 8, in 1968.

Nowadays, astronauts on board the International Space Station can record video messages, talk with their family and friends on the ground and have their own holiday parties in orbit. But the first Christmas humans spent in space was a little different.

The Apollo 8 crew — Frank Borman, Jim Lovell and Bill Anders — spent Christmas Eve in 1968 circling the moon. Mission controllers reminded the astronauts that millions of Americans would be tuning in to watch and listen to the words of the first people ever to orbit another world. [Apollo 8 Crew's Christmas Eve Message (Video)]

"We were told that on Christmas Eve we would have the largest audience that had ever listened to a human voice," Borman said in a statement, remembering the event. "And the only instructions that we got from NASA was to do something appropriate."

The astronauts decided to celebrate the holiday by reading from the book of Genesis. Lovell explained the team's reasoning.

The crewmembers ended the message by wishing everyone "on the good Earth" a Merry Christmas.

The Apollo 8 mission came seven years after President John F. Kennedy challenged the United States to land a man on the moon, and return him safely to the Earth, by the end of the 1960s — a goal that was famously achieved by the Apollo 11 mission in July 1969.

The Apollo 8 crew never touched down on Earth's nearest neighbor. The astronauts entered the moon's orbit on Dec. 21, 1968, and circled the moon 10 times on Christmas Eve, taking the iconic "Earthrise" photo on that day. Seeing the entire Earth from space was an intense moment for the crewmembers; they said that, while they were on a mission to discover the moon, they ended up discovering the Earth.

After the Christmas Eve orbits, it was time for the team to return to Earth. Mission control anxiously waited to hear if the Apollo 8 spacecraft's engine burn had successfully propelled it outside the moon's gravitational pull so the crew could get home. Confirmation came when Lovell radioed in, "Roger, please be informed there is a Santa Claus."

The crew splashed down safely in the Pacific Ocean on Dec. 27, 1968. The actual lunar landing was still months away, but humans had visited the moon for the first time and spent their first Christmas in space.

After Apollo 8, astronauts next celebrated Christmas in space on board Skylab, the first U.S. space station, which hosted astronauts on three missions from 1973 through 1974. Now, crewmembers of the International Space Station celebrate with Christmas decorations, phone calls to Earth and some special holiday food.