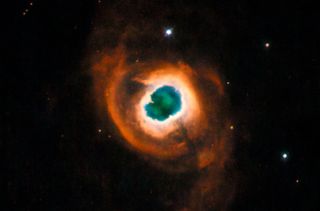 Planetary nebulas like Kohoutek 4-55 shown here in a photo from the Hubble Space Telescope provide the raw material for other stars and planets to form. Fluoride, like the kind in your toothpaste, was forged in stars and then spread across the universe.
(Image: © NASA/ESA/JPL)

It may only take brushing your teeth to help you feel connected to the cosmos.

New research suggests that fluorine, an element in toothpaste, may have been forged billions of years ago inside stars that are now long dead. Fluorine is commonly found in products like toothpaste, refrigerants and pharmaceuticals, and it's the 13th most abundant element on Earth.

Astronomers already knew that most elements have a stellar origin, but multiple theories speculate on the birth of cosmic fluorine.The new study suggests that red giant stars may be the main creators of fluorine, and the element likely originated in the high pressure cores of these sun-like stars. [Star Quiz: How Stellar Are You?]

"So, the fluorine in our toothpaste originates from the sun's dead ancestors," Nils Ryde, an astronomy lecturer at Lund University in Sweden who led the study, said in a statement.

Astronomers can determine the chemical makeup of a star by using a process called spectroscopy to examine the light it emits. Different elements absorb different wavelengths of light and show up as unique markers on a spectrum. To spot the fluorine-producing stars, Ryde and the team of researchers used a telescope in Hawaii and a new instrument that can analyze infrared light.

"Constructing instruments that can measure infrared light with high resolution is very complicated and they have only recently become available," Ryde said in the statement.

Different elements form under the high pressure and blazing temperatures burning at the center of stars. Stars act as nuclear reactors and fuse atomic nuclei together to form new elements. In a red giant, a phase that some stars enternear the end of their lifecycle, fluorine begins inching from the center to the outer bounds of the star. The star shakes off the fluorine and other newly created elements in a cloud of gas called a planetary nebula.

Other astronomers believe fluorine may come from supernova explosions or stellar winds, but the new study suggests that red giants are the main suppliers. However, the researchers will investigate other stars to see if fluorine could have been produced during the Universe's infancy, before the first red giants formed. The team will also examine supermassive black holes, like the one at the center of the Milky Way, where the life cycle of stars moves much faster than it does around the sun.

Details of the study were published in June in The Astrophysical Journal Letters.