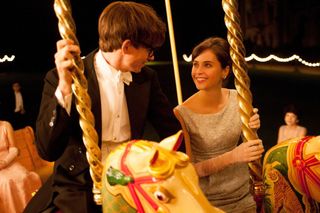 Stephen Hawking (Eddie Redmayne) and Jane Hawking (Felicity Jones) together in a still from "The Theory of Everything."
(Image: © Universal Pictures International )

The Stephen Hawking biopic "The Theory of Everything" cleaned up with four major Golden Globe nominations announced today (Dec. 11). The other big space movie of 2014, "Interstellar," also garnered one nomination from the Hollywood Foreign Press.

Christopher Nolan's "Interstellar" is nominated in the "Best Score" category as well for its music, composed by Hans Zimmer. You can find out who takes home the Golden Globes' top honors on Jan. 11 at 8 p.m. EST (0100 GMT) on NBC. Find a complete list of nominations on the Golden Globes website.