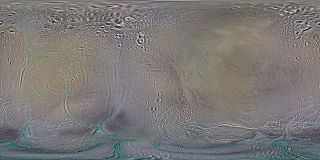 Saturn's big, icy moons dazzle in a series of new maps that show the frigid worlds in unprecedented detail.

The new maps of Saturn's moons, which were created by Paul Schenk of the Lunar and Planetary Institute in Houston using data gathered by NASA's Cassini spacecraft over the past 10 years, shine a new light on Saturn's six major icy moons — Mimas, Enceladus, Tethys, Dione, Rhea and Iapetus, researchers said.

"The new maps are the best global, color maps of these moons to date, and the first to show natural brightness variations and high-resolution color together," NASA officials said in a statement. "Colors in the maps represent a broader range than human vision, extending slightly into infrared and ultraviolet wavelengths." [Photos: The Rings and Moons of Saturn]

NASA's twin Voyager probes first lifted the veil on Saturn's large icy moons during flybys of the ringed planet in the early 1980s. Researchers then had to wait more than two decades to get more up-close looks, which finally started beaming home when Cassini entered orbit around Saturn in 2004.

At about 1.5 times the width of Earth's moon, the huge, hazy Titan is Saturn's largest satellite. But the six moons featured in the new maps are the next largest; their diameters range from Mimas' 250 miles (400 kilometers) to Rhea's 950 miles (1,530 km).

Each icy object is interesting in its own right. For example, Iapetus looks like a walnut, featuring a giant ridge that may be the remains of a long-dead companion moon. And Mimas has been dubbed the "Death Star Moon," for its resemblance to the planet-destroying weapon in the "Star Wars" films.

But Enceladus is perhaps the most intriguing of all. Astrobiologists regard Enceladus as one of the solar system's best bets to host life as we know it, because the moon harbors an ocean of liquid water beneath its icy shell. Furthermore, geysers near Enceladus' south pole blast material from the subsurface ocean far into space, potentially allowing a spacecraft to collect samples without even touching down.

Some of the stuff ejected by the geysers floats back down to the surface, coating Enceladus with relatively fresh material. The effects of this cosmic paint job are visible in the new Enceladus map.

"The yellow and magenta tones in Cassini's color map are thought to be due to differences in the thickness of these deposits," NASA officials wrote.

"Many of the most recently formed fractures on Enceladus — those near the south pole, in particular — have a stronger ultraviolet signature, which appears bluish in these maps," they added. "Their color may be due to large-grained ice exposed on the surface, not unlike blue ice seen in some places in Earth's Arctic."

The $3.2 billion Cassini-Huygens mission — a collaboration involving NASA, the European Space Agency and the Italian Space Agency — blasted off in 1997. It also delivered the Huygens lander to the surface of Titan in early 2005.

Cassini will continue to study Saturn and its moons until September 2017, when the probe will intentionally dive into the gas giant's thick atmosphere to make sure it doesn't crash into and contaminate the potentially life-supporting Titan or Enceladus.

This isn't Schenk's first foray into moon mapmaking. He also produced the best map yet of Neptune's icy satellite Triton, using data collected by Voyager 2 during its Neptune flyby in 1989.