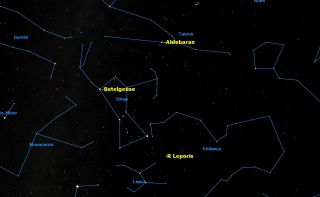 Look south around midnight to spot three of the reddest stars in the sky: Aldebaran, Betelgeuse and R Leporis.
(Image: © Starry Night software)

To a casual stargazer, most stars look the same. Some may be brighter, and others dimmer, but for the most part, they are all variations on the same theme. All stars are so far away that we see them only as pinpoints of light, often twinkling because of turbulence in Earth’s atmosphere.

If you closely compare some stars, however, you may notice that they are different colors. Some hot young stars, like most of the stars in the constellation Orion, are bluish in color. Other old cool stars, like Betelgeuse in the upper-left corner of Orion, are noticeably orange or red. The sun is somewhere in between, with its yellow-white hue. This Thanksgiving, look to the sky to find some amazing red stars shining brightly.

Color differences in stars reflect the temperature of the surfaces of these cosmic objects. Most people think of red as being hot, but if you think of a piece of iron heating in a forge, it turns slowly from dark red to white to blue. So, while it might seem counterintuitive at first, red stars are actually relatively cooler, and blue stars are incredibly hot. [Best Night Sky Events of November 2014 (Images)]

Winter evenings are a great time to study the colors of stars. The constellation Orion is a wonderful example. This is an active star-forming region in our part of the Milky Way, so most of the stars in Orion are young: hot and blue.

The major exception is Betelgeuse, a very old star classified as a red supergiant. It is in a late stage of evolution, and most of its hydrogen gas has been converted to helium. The star has grown to be huge — 1,000 times the diameter of the sun — but it has only about 10 times the sun's mass. As a result, Betelgeuse has very low density and a very tenuous atmosphere. Large spots on its surface cause it to vary in brightness.

In fact, Betelgeuse is one of the most likely candidates to collapse in on itself and become a supernova in the "near future." But don't be alarmed: "Near future" in the astronomical time scale could be 10,000 years.

Farther north in the sky is a more typical red giant star, Aldebaran in Taurus. Aldebaran looks much like the sun will look in about 5 billion years, when it has converted most of its hydrogen to helium. Aldebaran is only slightly more massive than the sun, but it has swollen to 44 times its diameter. Aldebaran doesn't have enough mass to become a supernova. Instead, it will shed its outer layers to eject a planetary nebula, like the Ring Nebula in Lyra.

The third red star is a very different creature. R Leporis is also a red giant, but its internal fusion processes have produced a lot of carbon. This "sooty" atmosphere causes stars like this to glow deep red.

Like most red stars, R Leporis is variable in brightness, varying from 5.5 to 11th magnitude over a period of about 427 days. Now is a good time to observe it because it is close to maximum brightness at magnitude 6.5, so it's easily visible in binoculars.

You can use a line from Mintaka, the right-most star in Orion's Belt, through Rigel, as a guide to find R Leporis, or use Arneb and Mu Leporis in the constellation Lepus. You will know you've found it by its deep red color.

This star was discovered in 1845 by J. R. Hind, who described it as looking "like a drop of blood on a black field."

Having found one "carbon star," you may want to track down others. The Astronomical League has a program that challenges observers to locate a list of 100 carbon stars.

Editor's Note: If you have an amazing image of red stars in the night sky or any other skywatching photo you'd like to share for a possible story or image gallery, please contact managing editor Tariq Malik at spacephotos@space.com.