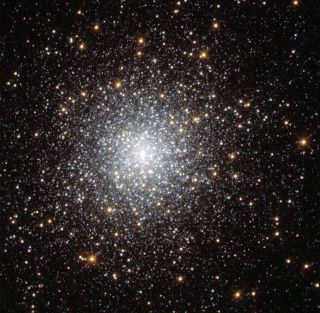 A Hubble image shows the globular cluster Fornax 3 in the dwarf galaxy Fornax. Astronomers are mystified by stars that seem to be missing from the cluster.
(Image: © NASA, ESA, S. Larsen (Radboud University, the Netherlands))

A massive population of stars is missing, and scientists are stumped as to where it could be.

New observations from the Hubble Space Telescope challenge a previous theory for the apparent disappearance of a massive number of stars. Because some star clusters around our Milky Way galaxy have fewer stars than observations suggest they should, astronomers suspected many of these stars were ejected from their clusters to ultimately find new homes in the Milky Way. But the new Hubble telescope views of the distant Fornax galaxy cluster challenge this picture. That's because, in the case of Fornax, such ejected stars would have nowhere to hide.

"If these kicked-out stars were there, we would see them — but we don't!" Frank Grundahl of Aarhus University in Denmark, a co-author on the paper, said in a statement. The finding draws into question whether the missing stars were ever present at all, in globular clusters around Fornax or the Milky Way. [8 Baffling Astronomy Mysteries]

Globular clusters are dense balls of stars that usually orbit galaxy centers but lie far away from those centers. They are ancient denizens of the universe, containing some of the oldest living stars.

Astronomers once thought the stars in each of these clusters must have all formed together, at about the same time. But observations of globular clusters near the Milky Way revealed that roughly half the stars are old, while the other half are much younger.

These younger, second-generation stars are polluted with levels of nitrogen and other materials not seen in the first-generation stars, observations showed. This necessitated changes to the formation story of the clusters: Astronomers say it indicates that the young stars formed from material ejected by the older stars, meaning there should be significantly more old stars than young.

But this doesn't fit with the observations that the globular clusters have roughly a 50/50 split of old stars and young.

This missing population of first-generation stars isn’t entirely unexplainable near the Milky Way, which itself has a high population of old stars. The stars from the clusters could have been ejected and simply taken up residence on the outskirts galaxy, blending in nicely with the population, as scientists have hypothesized.

But this can't explain new observations of the Fornax globular clusters, which do not exist near a galaxy with a high population of old stars.

The Fornax clusters 1, 2, 3 and 5 orbit the Fornax dwarf galaxy, located roughly 62 million light-years from Earth. The ratio of young stars to old is roughly the same in these clusters as it is in the clusters near the Milky Way (other star clusters have different mixtures of star ages). This led astronomers to believe the Fornax clusters formed in the same way: The younger stars were born of material from the older stars, and many of the older stars were then ejected.

But if the stars were ejected, where did they go? Unlike the Milky Way, the galaxy these clusters orbit does not contain enough old stars to account for the huge number that must have been ejected from the clusters. In other words, there's nowhere for the stars to hide.

The findings are leading astronomers to question their theories about globular clusters near the Milky Way. What if the missing stars aren't hiding in the galaxy? What if the "missing" stars never existed? And if that's the case, how did the second-generation of stars form?

"Our leading formation theory just can't be right," said Grundahl. "There's nowhere that Fornax could have hidden these ejected stars, so it appears that the clusters couldn't have been so much larger in the past."

It appears that scientists will have to go back to the drawing board and rethink how these types of globular clusters form.

The new work is detailed in a paper published Nov. 20 in The Astrophysical Journal.