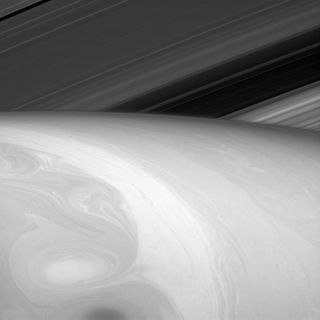 A sublime picture of Saturn's clouds taken by the Cassini-Huygens mission shows swirls of material mixing like paint in water or cream whirling through coffee.
(Image: © NASA/JPL-Caltech/Space Science Institute)

A sublime picture of Saturn's clouds shows swirls of mixing material, like paint spiraling in water or cream whirling through coffee.

NASA's Cassini spacecraft captured this intimate snapshot of Saturn on Aug. 23 while flying about 1.1 million miles (1.7 million kilometers) from the ringed planet, though the space agency unveiled the image on Monday (Nov. 17) as an image feature.

Saturn's curling clouds are not so different from milk swirling in a cup of joe:  Both are examples of fluid dynamics, or the way liquids and gasses move and behave. The conditions in Saturn's atmosphere have created some unique formations, like a hexagon-shaped cloud.

In Cassini's new Saturn, each pixel covers 63 miles (102 km). The spacecraft was positioned on the sunlit side of Saturn's rings, which serve as a backdrop and about 25 degrees above the plane of the rings. The image was taken in red light with the Cassini spacecraft's narrow-angle camera.

Saturn is the second-largest planet in our solar system, and also the least dense — it's made up entirely of gas (mostly hydrogen), and lacks any solid surface. The very large, multicolored bands that wrap around Saturn are the result of super-fast winds in the upper atmosphere, which can reach up to 1,100 mph (1,800 km/h) around its equator.

The Cassini spacecraft has been sending images of Saturn back to Earth since 2004. Its current extended mission is set to last through 2017.