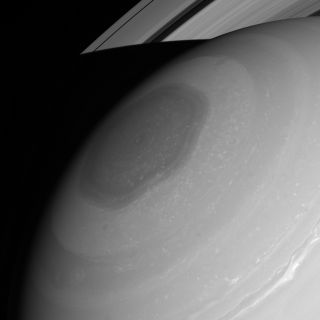 What looks like a weird hexagon on Saturn is actually a long-lived jet stream that has swirled around the ringed planet's north pole for more than 30 years. This NASA image, released on Oct. 7, 2014, was actually captured in July 2013 by NASA's Cassini spacecraft.
(Image: © NASA/JPL-Caltech/Space Science Institute)

Forget Saturn's rings. The jewel of the solar system has another stunning feature that only faraway spacecraft can see clearly: a weird hexagon-shaped vortex that's been swirling above Saturn's north pole for at least 30 years.

NASA's Cassini spacecraft captured this dramatic portrait of Saturn's geometric jet stream in July 2013 from about 605,000 miles (973,000 kilometers) away from the planet. The image — which NASA released this week — has a scale of 36 miles (58 km) per pixel and faces the sunlit side of the rings, from about 33 degrees above the ringplane.

The puzzling, hexagonal cloud pattern was first spotted by NASA's Voyager mission in the early 1980s. It was still there after Cassini arrived in orbit around Saturn in 2004 after a long journey from Earth than began in 1997.

Cassini started getting its best views of the six-sided jet stream in August 2009, when sunlight finally began shining on Saturn's northern hemisphere at the start of the planet's northern spring. (Saturn takes 29 years to complete one orbit around the sun and its seasons last roughly seven years.)

The vortex over Saturn spans about 20,000 miles (30,000 km) across, with air currents racing 200 mph (about 322 km/h), according to NASA. Other planets have jet streams but astronomers haven't seen anything like this weather pattern anywhere else. Scientists think the vortex has been able to persist for so long because Saturn, a gas giant, has no landforms to help break up storms like mountains and icecaps do on Earth.

Last year, when NASA released their highest resolution movie of Saturn's wavy jet stream, space agency officials said that there are actually smaller vortices within the main hexagon, some spinning in the opposite direction. "Small" is relative. The biggest of these small storms stretches about 2,200 miles (3,500 km) across — double the size of the biggest hurricane recorded on Earth.