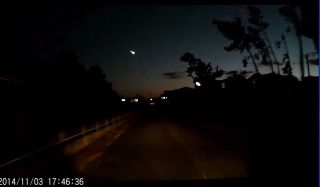 Skywatcher Tam Shin captured this dash camera video of a brilliant fireball over Japan on Nov. 3, 2014 while driving in the city of Koga, just north of Tokyo. The video was posted on Youtube.
(Image: © Tam Shin via YouTube)

Monday, it turns out, was a busy night for fireballs. A brilliant fireball streaked over Japan and was captured on video by several observers, making it only the latest fiery display of space rocks from the heavens.

The Japanese dispay followed three other fireball reports from across the U.S., including a dazzling fireball that surprised observers across West Virginia and other eastern states. One of those U.S. reports included a fireball over Chicago that appears to be man-made, a nighttime parachute stunt by the energy drink Red Bull.

But the other fireballs, including the event over Japan, were the real deal. In Japan, observer Tam Shin posted a video of the fireball view on YouTube, as the object streaked across the early evening sky. According to a translation of the video description, the sighting took place in Koga city, outside Tokyo.

The fireball appears to be traveling east to west, which means if it is a space rock, it could be part of the Taurid meteor shower.

Another amazing video of a fireball was captured at Japan's Fukuoka airport, according to this BBC report. It's unclear if the videos are of the same fireball.

Back in the United States, video of the West Virginia fireball was captured by the dash camera on a cruiser with the Benwood Police Department. Over 500 people made reports to the American Meteor Society about the fireball.

Both the West Virginia fireball and the Japan fireball appear to have a greenish tint to them.

Bill Cooke, head of NASA's Meteorite Environment Office at the Marshal Space Flight Center, said in an email today (Nov. 5) that the color can be the result of the meteor's composition, and blue-green colors are often attributed to magnesium. But Cooke said a green or blue color is also typically associated with faster meteors. Faster meteors heat up the air around them, and depending on the composition, this can also create a colorful glow.

On Monday, Cooke told Space.com that fireball meteors are common this time of year, and he expects there will be more sightings this week.