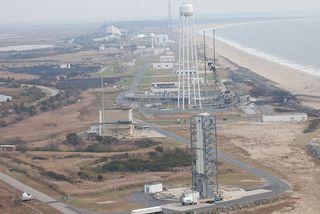 Private spaceflight company Orbital Sciences Corp. is starting to piece together the timeline of events leading up to the explosion of its Antares rocket just after liftoff on Tuesday evening (Oct. 28).

Orbital Sciences is still in the process of investigating the root cause of the Antares rocket failure. No one was hurt in the explosion, but the rocket was carrying an unmanned Cygnus spacecraft expected to deliver supplies to the International Space Station for NASA when the accident occurred. According to an Orbital update released Thursday (Oct. 30), the rocket seemed to perform normally until about 15 seconds after launch, when some as-yet-unknown variable caused the rocket to catastrophically fail.

"Evidence suggests the failure initiated in the first stage after which the vehicle lost its propulsive capability and fell back to the ground impacting near, but not on, the launch pad," Orbital Sciences representatives wrote in an update. The rocket was launching from a pad at NASA's Wallops Flight Facility on Wallops Island, Virginia. [See images of the Antares explosion]

Orbital Sciences holds a $1.9 billion contract with NASA to fly eight robotic missions to the International Space Station using Cygnus and Antares. The launch Tuesday (if it had been successful) would have started the company's third official resupply trip to the station.

Company representatives are also surveying the damage caused by the accident. An Orbital safety team found that a "significant amount of debris" is still located around the site of the failure, and the company might be able to use that evidence to aid in their investigation, Orbital representatives said.

"Some of the Cygnus cargo has also been found and will be retrieved as soon as we have clearance to do so to see if any survived intact," Orbital representatives said in the same update. "After up close visual inspections by the safety team, it still appears the launch site itself avoided major damage. There is some evidence of damage to piping that runs between the fuel and commodity storage vessels and the launch mount, but no evidence of significant damage to either the storage vessels or launch mount."

Crewmembers on the space station still have plenty of supplies on the orbiting laboratory, so there is no immediate danger posed by the Cygnus loss, NASA officials have said.

The space station astronauts have had to rearrange some of their plans in light of the rocket failure, however. Officials with the European Space Agency said there will now be a need to alter how trash is stored in Europe's Columbus module on the station.

Cygnus spacecraft are designed to burn up harmlessly in Earth's atmosphere after leaving the space station at the end of missions, meaning that astronauts can load the spacecraft up with things they no longer need.

"The unglamorous fact is that we now need to rework our trash and stowage choreography for Columbus," ESA officials wrote in an Oct. 30 blog post. "We had a strategy in place to operate efficiently but now we have to work with the trash we cannot get rid of with Orbital-3!"

Editor's Note: NASA officials are urging residents of the area around the launch site to keep away from any rocket debris that might wash up on shore or found on land. If you think you may have found pieces of the rocket, or if your property sustained damage from the failed launch, please call the incident response team at (757) 824-1295.