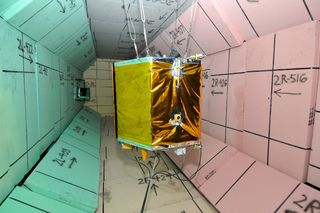 Doomed for destruction is DebriSat, a nonfunctional, full-scale representation of a modern satellite, shown here prior to test at the Range G target tank at the Arnold Engineering Development Complex in Tennessee.
(Image: © U.S. Air Force/Jacqueline Cowan)

Talk about a "bang up" job.

A full-scale lookalike of a modern satellite was destroyed in a ground test chamber recently to help scientists better grasp the effects of space collisions.

For instance, the 2009 collision between the U.S. Iridium 33 and the derelict Russian Cosmos 2251 spacecraft spotlighted the difference between breakup fragments from the newer Iridium compared with the older Russian Cosmos satellite. [7 Wild Ways to Clean Up Space Junk]

On one hand, the Department of Defense (DOD) and NASA's satellite breakup models described the fragments from the older Cosmos satellite well. But there were noticeable discrepancies in the breakup forecast of the Iridium 33.

Enter DebriSat, built to be busted up for science.

The DebriSat test was designed to help researchers craft better models for how satellites break up. The data produced from the test might help people working in the orbital debris community as well.

"This was a very important experiment, one that would benefit many groups," saidJer Chyi (J.-C.) Liou, NASA chief scientist for orbital debris from the NASA Orbital Debris Program Office at the Johnson Space Center in Houston, Texas.

The test was a collaborative effort among several organizations, Liou said, including the U.S. Air ForceSpace and Missile Systems Center, NASA, The Aerospace Corp., the University of Florida and the Air Force Arnold Engineering Development Complex (AEDC).

Blast from the past

The need for laboratory-based impact tests was recognized by the DOD and NASA decades ago, Liou told Space.com. Data gleaned from the recent test, he said, can improve satellite breakup models and also help in improving space situational awareness — the ability to view, understand and predict the physical properties of human-made objects in orbit around the Earth, with the objectives of environment definition and protecting operational spacecraft.

Liou said that back in 1992 there was a key laboratory-based test, conducted by the then Defense Nuclear Agency and the AEDC. It was called the Satellite Orbital debris Characterization Impact Test, or SOCIT. A U.S. Navy Transit navigation satellite from the 1960s was used in that test chamber assessment.

"You can imagine that the materials and the construction techniques that we use today for building satellites are very different from those back in the 1960s," Liou said.

The 123-pound (56 kilograms) DebriSat took some two years to design and build, Liou said. "It was a good representation of the modern satellites that operate in the low-Earth orbit region."

DebriSat came complete with major subsystems and standard components — such as solar panels, star trackers, reaction wheels, flight computer, thrusters, antennas, avionics boxes and cabling. It was designed and fabricated by the University of Florida and supplied to AEDC for destruction.

"In the United States, it's the only facility that could fire a projectile with sufficient kinetic energy to completely fragment DebriSat. That was the whole objective of this test," Liou said. "It was like rolling thunder," he said, when the experiment was done April 15.

A more than 1.2-pound (570 grams) projectile impacted DebriSat at over 15,210 miles per hour (6.8 km/sec) and completely fragmented the target.The chamber's walls were lined with foam to stop the debris fragments from impacting the sides of the tank, a method called "soft-catch." [Satellite Quiz? How Much Do You Know?]

Picking up the pieces

The test shot result: An estimated 85,000 fragments that are 2 millimeters and larger.

"We don't know the outcome until we actually go through the fragments, process them, pick up and count the numbers," Liou said. "That 85,000 is not everything as it is a benchmark number for planning purposes, based on the current NASA satellite breakup model."

An army of students is carefully assessing the DebriSat scraps, Liou said.

"It was a well-planned test and what happened was exactly what we expected," he added. "The target was completely smashed into tens of thousands or more small pieces. We are just going through the data…a tedious effort but necessary to get the data."

A first step is to X-ray all the foam panel and foam pieces to help extract the DebriSat leftovers, Liou said. "The current plan is to completely process the fragments, extract the fragments, and measure the properties of the fragments. It will take two to three years, assuming that we can get the budget we would like to have," he said.

A Debris Launch Vehicle (DebrisLV) provided by The Aerospace Corp. of El Segundo, California, was also destroyed at the Arnold Engineering Development Complex. The DebrisLV impact test was conducted two weeks before the DebriSat test – on April 1.

"The DebriSat tests were designed to provide a high level of detail while being representative of what a real event could be," said Marlon Sorge of The Aerospace Corp.

The DebrisLV target used for the practice shot ended up becoming a separate experiment of its own, Sorge said. The Aerospace Corp. constructed DebrisLV, a mockup of an upper stage, and was even able to use some actual flight hardware in it, he said.

"Although we expect that one of the major contributors to the future debris population will be collisions with upper stages, we have little data on these events," Sorge said. The DebrisLV test will provide the first real detail on upper stage collisions, he said.

Sorge told Space.com that DebriSat itself went through a very detailed design process to make it as realistic as possible.

"Information on over 100 actual satellite designs was used to make DebriSat representative of real satellites. Early results suggest that the complexity was realistic enough to generate the large amount of debris expected from a real event," Sorge said.

The DOD and NASA have a lot invested in space systems that need to be protected from debris, Sorge said.

"Between the data from the debris characterization and the many instruments observing the tests, the whole debris community and the space community overall will benefit from this project," Sorge concluded.

Leonard David has been reporting on the space industry for more than five decades. He is former director of research for the National Commission on Space and is co-author of Buzz Aldrin's 2013 book "Mission to Mars – My Vision for Space Exploration" published by National Geographic. Follow us @Spacedotcom, Facebook and Google+. Original article on Space.com.