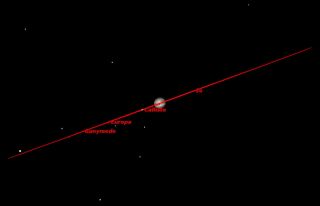 Jupiter and the moon are set to meet up in the early morning sky on Saturday (Oct. 18).

If your sky is clear early tomorrow morning, you'll be treated to a lovely celestial scene as a fat, waning crescent moon passes just over 7 degrees below and to the right of the largest planet in the solar system, Jupiter. Your clenched fist held at arm's length measures approximately 10 degrees, so the moon and Jupiter will appear spaced roughly three-quarters of a fist apart.

Jupiter should look like a brilliant, nontwinkling star. It shines at magnitude minus 2.0, meaning that it shines nearly twice as brightly as Sirius, the brightest star in the sky. The moon and Jupiter will make for an eye-catching pair during the early hours of Saturday. [See amazing images taken by skywatchers in September 2014]

Jupiter currently rises around 1:35 a.m. local time. About two hours after it comes up over the horizon, Jupiter will have climbed about 20 degrees in the eastern sky. It will be the brightest starlike object in the sky.

The large planet is currently tucked just inside the border of the constellation Leo, the Lion. Just off to the left of the planet is the striking curve of stars shaped like a sickle that forms the head, flowing mane and chest of the animal. At the bottom of the sickle is the bright, bluish 1st-magnitude star Regulus, which ranks 21st on the list of brightest stars, but it still only shines at about 1/16th the brightness of Jupiter.

Jupiter will glow regally more than halfway up in the east-southeast during morning twilight, a most opportune time to try to study the details of this planet's rich cloud features.

Keep in mind that what you are seeing on Saturday morning is an illusion of perspective. The moon is about 249,000 miles (400,000 kilometers) away, while Jupiter is almost 2,100 times farther away, at a distance of 522 million miles (840 million km). If the sky is cloudy in your area, don't fret; the moon and Jupiter will get together again next month, on Nov. 14.

Editor's Note: If you take an amazing skywatching photo of the moon and Jupiter or any other celestial site that you'd like to share for a possible story or image gallery, please contact managing editor Tariq Malik at spacephotos@space.com.