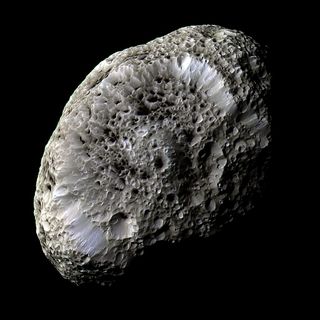 A spacecraft exploring the Saturn system was zapped by static electricity sent out by one of the ringed wonder's many moons in 2005, a new study suggests.

In fact, scientists have found that the Cassini spacecraft was "briefly bathed in a beam of electrons" coming from the moon Hyperion's surface, NASA officials said. No, this isn't proof of alien life: The particle beam was likely generated by the odd, porous moon's exposure to ultraviolet radiation from the sun and Saturn's magnetic field, researchers said.

"It was rather like Cassini receiving a 200-volt electric shock from Hyperion, even though they were over 2,000 kilometers [1,200 miles] apart at the time," Tom Nordheim, a doctoral candidate at Mullard Space Science Laboratory (MSSL), University College London, said of the new finding in a statement.

The study presents some surprising results. Scientists studying Saturn and its moons didn't think that the small, sponge-looking moon Hyperion could have any major interaction with the ringed planet's magnetosphere.

Researchers have long known that static electricity is an important phenomenon on Earth's moon. However, this is the first time they have confirmation of static at play on another cosmic body. Luckily, the beam didn't seem to harm Cassini, but future robotic and crewed missions should be wary of possible electric shocks from bodies in the solar system, researchers said.

"Our observations show that this is also an important effect at outer planet moons, and that we need to take this into account when studying how these moons interact with their environment," Geraint Jones, a member of the Cassini Plasma Spectrometer instrument team who helped supervise the study, said in the same statement.

The $3.2 billion Cassini mission launched to space in 1997. The probe arrived at Saturn in 2004 and has been orbiting the gas giant ever since. Cassini is expected to continue studying Saturn and its moons until 2017, when the spacecraft will end its mission by intentionally plunging into the gas giant's atmosphere.