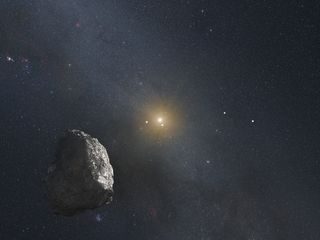 A NASA spacecraft may have another frigid object in its sights after zooming past Pluto next summer.

NASA's Hubble Space Telescope has spotted three faraway bodies that the New Horizons probe could potentially visit after completing its highly anticipated flyby of the Pluto system in July 2015. One of these newly identified objects is definitely reachable, researchers said, while further tracking is required to determine if the other two are indeed accessible.

"This has been a very challenging search, and it's great that in the end Hubble could accomplish a detection — one NASA mission helping another," New Horizons principal investigator Alan Stern, of the Southwest Research Institute (SwRI) in Boulder, Colorado, said in a statement. [New Horizons' Flight to Pluto in Pictures]

The $700 million New Horizons mission launched in 2006 with the primary goal of returning the first-ever up-close looks at Pluto and its moons. But Stern and his colleagues have always wanted the probe to fly by another object in the Kuiper Belt — the ring of frigid bodies beyond Neptune — after the Pluto encounter.

An additional flyby would increase researchers' knowledge of the mysterious Kuiper Belt, mission team members say. Kuiper Belt objects (KBOs) have never been "heat-treated" by the sun, so they're viewed as relatively pristine building blocks left over from the solar system's formation 4.6 billion years ago.

Mission scientists began the hunt for additional KBOs in 2011 using some of the world's biggest ground-based telescopes. It was a tall order, since most KBOs are very small, and all of them are dim and far away. The search turned up some new objects, but none of them were within New Horizons' fuel reach.

So the team applied for time on Hubble. The scientists were granted use of the iconic spacecraft for an initial pilot study this past June, and then for a wider survey that lasted from July to September.

Analysis of Hubble's data turned up the three new KBOs, which are each 1 billion miles (1.6 billion kilometers) beyond Pluto and range in size from 15 to 34 miles wide (25 to 55 km). The KBOs are each about 10 times bigger than a typical comet but just 1 to 2 percent as big as Pluto, researchers said.

"We started to get worried that we could not find anything suitable, even with Hubble, but in the end the space telescope came to the rescue," said New Horizons science team member John Spencer, also of SwRI. "There was a huge sigh of relief when we found suitable KBOs; we are over the moon about this detection."

The New Horizons team will choose which KBO to visit next summer, Stern told Space.com. The additional flyby would likely occur in 2019, he added — but there's no guarantee it will happen.

"In 2016, we need to propose to NASA to get permission (and funding) to fly the KBO mission," he said via email.