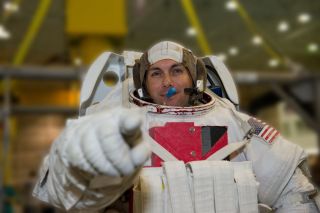 While most of us will never get the chance to go on a spacewalk, a simulated version of the out-of-this-world experience may soon be available to the general public.

Waypoint 2 Space, a Houston-based company that trains people for commercial spaceflight, has launched a Kickstarter campaign to build a spacewalk simulator. The Modular EVA Training System (METS) Kickstarter will run through Nov. 8, and the company plans to officially open the device to amateur spacewalkers in March 2015.

Astronauts aboard the International Space Station and other craft often have to perform EVAs (extravehicular activities), commonly called spacewalks, during which they exit their vehicle to perform maintentance and repair tasks.

METS is designed to hold a spacecraft training module 12 feet (3.7 meters) long and 10 feet (3 m) wide. Trainees who enter the model spacecraft will experience the illusion of weightlessness, thanks to METS' gravity-offset system.

The mock spacecraft will be enclosed in dark room, with only the trainees' spacesuit lights providing any illumination. METS will rotate horizontally and vertically, and star fields projected on the walls will move, to give trainees the sensation they are actually moving through space, company representatives said.

METS was not part of Waypoint 2 Space's original budget, so the company launched a Kickstarter campaign last week to fund the spacewalk training pod. The company needs $83,000 by Nov. 8 to build METS. As of Thursday (Sept. 25), the campaign had raised about $5,000. You can learn more about the campaign here: https://www.kickstarter.com/projects/waypoint2space/spacewalking-on-earth

Waypoint 2 Space is not the only company in the commercial-spaceflight training game. For example, Final Frontier Design developed a spacesuit experience that allows anyone to try on a pressurized spacesuit and bounce around.

Other spacewalk training facilities — such as the Neutral Buoyancy Lab near NASA's Johnson Space Center in Houston, a giant pool where NASA astronauts train — are usually closed to the public or too expensive for the average space enthusiast to afford, Waypoint 2 Space representatives said.

"If funded, METS will be a game-changing space training tool allowing us to train people for EVAs safely and at extremely low cost compared to current government systems," Kelly Soich, director of programs and chief payload specialist for Waypoint 2 Space, said in a statement.