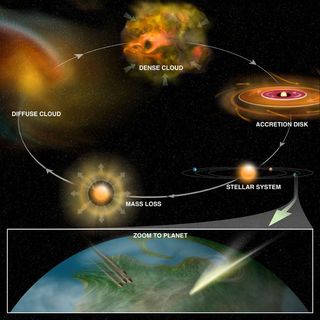 A two-yearsurvey of enormous interstellar dust clouds has turned up eight organicmolecules in two different regions of space. One is a stellar nursery awash inlight while the other is a cold, starless void.

Thefinding, detailed in the current issue of Astrophysical Journal,supports other recent studies suggesting molecules important for life commonlyform in the gas and dust clouds that condense to form stars and planets.

The newlydiscovered molecules are made up of 6 to 11 atoms each and are classified asorganic because they contain carbon.

Five of themolecules were discovered in Sagittarius B2(N), a star-forming dust cloudlocated 26,000 light-years from Earthnear the center of the MilkyWay Galaxy. This stellar nursery is the largest known repository of complexinterstellar molecules.

The otherthree molecules were found in the Taurus Molecular Cloud (TMC-1), located only 450light-years away. TMC-1 is starless; it is cold and dark and has a temperatureof only 10 degrees above absolute zero.

"Thediscovery of these large organic molecules in the coldest regions of theinterstellar medium has certainly changed the belief that large organicmolecules would only have their origins in hot molecular cores," saidstudy team member Anthony Remijan of the National Radio Astronomy Observatory(NRAO). "It has forced us to rethink the paradigms of interstellarchemistry."

Just becausea molecule is organic does not mean that it is made by living things. In fact,many of the newly spotted molecules are poisonous to organisms on Earth, Hollissaid. But one of the molecules found in Sagittarius B2(N), called acetamide,contains a type of chemical bond important for linking together amino acids,the molecular building blocks of proteins.

Made up of9 atoms, acetamide "is the largest molecule found in space that has thatbond," Hollis told SPACE.com.

The moleculesare thought to form by two main mechanisms. In the first, simple chemicalreactions add an atom to a molecule that is stuck to the surface of a dustgrain afloat in space. The second method involves chemical reactions betweenneutral molecules and highly reactive molecules called radicals.

Within adust cloud, thousands of billions of molecules undergo the same types ofrotation, emitting and absorbing the same radio frequencies. The end result isa signal strong enough to be detected by instruments on Earth.

Takentogether, the findings suggest that the chemical ingredients necessary for lifebegan taking shape long before our planet was formed.

Manyscientists now accept the notion that ancient meteorites and comets helpedjumpstart life on our planet by bringing a significant amount of water, organicmolecules and even amino acids to early Earth.

Scientistsnow think those imprisoned organic molecules were likely created in the massivedust and gas clouds that eventually coalescedinto planets and stars, comets and meteorites. Dust clouds are thought to formwhen events such as novasand supernovascaused chemical elements and molecules created during thermonuclear reactionsinside stars to be ejected into space.

"Froma research and astrobiology point of view, it's been a goldmine," he said.