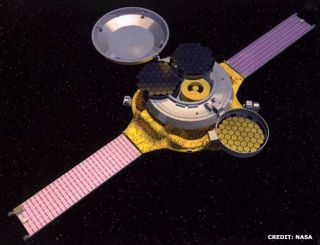 An artist's concept of the Genesis spacecraft in orbit with its sample return capsule open and its collector arrays exposed to the solar wind.
(Image: © NASA/JPL.)

A team of NASA scientists, navigators and helicopter stunt pilots is ready to snatch a space sample canister out of the sky next month when the Genesis spacecraft returns to Earth.

After more than two years collecting solar wind particles streaming from the Sun, Genesis will hurl its sample return capsule at the Utah desert on Sept. 8, where a pair of helicopter crews expect to snag it in mid-air.

"[Genesis] will help us understand the composition of the Sun, which makes up 99 percent of the solar system," said David Lindstrom, Genesis program scientist at NASA headquarters, during a press briefing today. "We're excited...[but] the real excitement for a scientist begins when we get these samples back to our labs."

Launched in 2001, Genesis has spent the last three years outside the Earth's magnetic field to sample solar wind particles for study on Earth. Five collector panels were open to the solar wind for 27 months before folding into a sample return capsule last April for the trip back to Earth.

The sample canister will be retrieved above the U.S. Air Force Utah Test and Training Range, which sits in the Great Salt Lake desert about 70 miles (112 kilometers) west of Salt Lake City, Utah. Genesis marks NASA's first attempt to return extraterrestrial space samples since the Apollo 17 crew hauled home rocks from the moon in 1972.

Genesis has already begun steering for home, with its last course change leaving it almost one million miles (1.3 million kilometers) from Earth. Two more course adjustments are expected to aim the spacecraft at its Utah target.

"Right now we're traveling about 600 miles an hour," said George Carlisle, NASA's navigation chief for Genesis, during the briefing. "When we enter Earth's atmosphere, we'll traveling between 3,000 and 4,600 miles and hour."

Carlisle said the Genesis spacecraft is designed to start spinning at about 8:00 a.m. EDT (1200 GMT) on Sept. 8, then release its sample return capsule toward the Utah testing range. At 12:00 p.m., the capsule should smack into the Earth's atmosphere 85 miles above Salem, Oregon and reach Utah airspace 96 seconds later.

A drogue chute will slow the capsule to subsonic speeds, where the main parachute is expected to deploy. Two waiting helicopters flown by Hollywood stunt pilots should then swoop up to the capsule and catch its parachute with a hook and pole about 4,000 feet above the Utah desert.

"We kind of agreed that out of a scale of one to 10, this is between an eight and nine," said Dan Rudert, a capture pilot with South Coast Helicopter in Santa Ana, California, of the sample retrieval maneuver.

But first, Genesis has to reach Earth.

In 10 days the spacecraft should execute a course adjustment setting on a Utah-bound path. About 52 hours before it arrives, mission managers will have one more chance to make final tweaks in the spacecraft's Earth approach. There is also a fall back plan if an anomaly pops up prior to three hours before capsule separation.

"There's another opportunity for reentry in six months," Carlisle said. "At any point, if anything goes wrong, we can punch the button and bail out and take the six-month back up. "