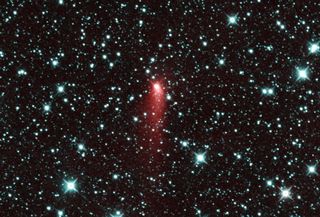 A previously unknown "asteroid" spotted by a NASA telescope is actually a comet, according to recent observations.

NASA's NEOWISE space telescope, which started its newest near-Earth object-hunting mission in 2013, spotted what scientists thought was an asteroid two times in 2013. Researchers thought it was an asteroid because it didn't appear to have a coma (a halo of fuzziness surrounding the object) or a tail — telltale signs of a comet. But all that changed with a follow-up observation.

The comet, known as C/2013 UQ4, now has a clearly visible tail. In fact, it extends for 62,000 miles (100,000 kilometers). NEOWISE spotted the comet just after it made its closest approach to the sun, causing it to become more active in July. The comet's "spectacular activity is driven by the vaporization of ice that has been preserved from the time of planet formation 4.5 billion years ago," representatives from the Jet Propulsion Laboratory, which manages the NEOWISE project for NASA, said in a statement. [The 7 Strangest Asteroids in the Solar System]

In addition, astronomers have learned that the comet takes 450 years to orbit the sun, and that it moves through the solar system in the opposite direction of the planets, like a car going the wrong way down a one-way street.

NEOWISE itself is a new incarnation of the WISE (Wide-field Infrared Survey Explorer) telescope, which began its mission in 2009 by scanning the sky for asteroids, brown dwarfs (dim, failed stars), and galaxies.

In September 2013, though, NEOWISE was awoken and given the task of searching the solar system for comets and asteroids that might threaten Earth. Its new mission is expected to last three years. During that time, the spacecraft will measure the diameters of objects that it finds, and determine their albedos (how much light they reflect).