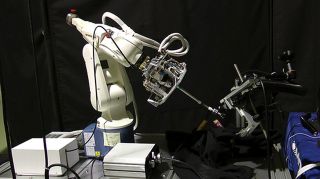 KidsArm with a biopsy tool attached.
(Image: © MDA and CIGITI)

The technology powering robotic arms in space could be used to perform minor surgeries for children on Earth.

MacDonald, Dettwiler and Associates (MDA) — the manufacturer of the robotic arms Canadarm and Canadarm2 — is now part of a project called KidsArm. The effort aims to use a mini-arm to automate some tasks during pediatric surgery.

"Our tests indicate we can operate on tiny structures such as blood vessels without damaging them," said Thomas Looi, the program director for the Centre for Image-Guided Innovation and Therapeutic Intervention at the Hospital for Sick Kids (SickKids) in Toronto, said in a statement.

"The goal of the robotic arm is to help doctors perform certain procedures many times faster than if they were only using their hands, and with increased accuracy," Looi added. "Some of this would be done autonomously. While we are not quite there yet, KidsArm is able to perform three to five suture points autonomously."

KidsArm includes a vision-based system that works like robotic eyes, allowing guiding a small surgical arm to be guided to the spot it needs to reach in order to do its work. To figure out where to suture, KidsArm uses a stereo camera that creates a "3D point cloud" of spots to guide the tool tip into the zone.

KidsArm is in testing right now at SickKids to see if it will be useful for anastomosis, a procedure that involves connecting vessels and similar parts of the body. Researchers are testing the accuracy of the robotic arm's camera pointing system, and how well it puts in the sutures.

SickKids announced the project in a NASA news release, but In a NASA press release, did not disclose when doctors plan to use the technology regularly for surgeries.

MDA is involved in several other surgical robotic arm projects. The company was a co-creator of the University of Calgary's neuroArm, which works inside an MRI and did its first operation in 2008. A new generation of arm is being developed for commercial use.

Additionally, MDA and Ontario's Centre for Surgical Invention and Innovation have a robotic arm, called Image-Guided Autonomous Robot, under clinical testing that could be useful for breast cancer diagnosis and surgery.