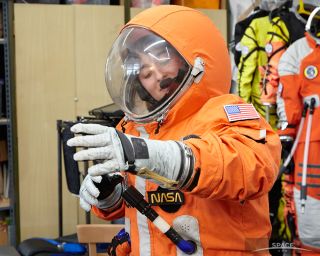 NEW YORK — If you've ever wanted a taste of outer space living without ever leaving Earth, Final Frontier Design has a suit for you.

The founders of Final Frontier Design — a spacesuit design company based here in Brooklyn — want space enthusiasts visiting the Big Apple to have the chance to bounce around in a pressurized spacesuit for the relatively reasonable price of $395. Participants in the "Space Suit Experience" will get the opportunity to swing a golf club, fly above the moon in a flight simulator and pose like an astronaut all while wearing the spacesuit.

"I recognize that it's not the cost of a movie ticket, so some people might not want to spend $400 to try on a spacesuit, but I think there are quite a few people out there who are fascinated and kind of obsessed with spaceflight," Final Frontier Design president Ted Southern told Space.com. "I know there is training out there that you can spend $50,000 if you want to. In an ideal sense, I'd like to think of this as an opening up of space tourism to just anybody who's interested in that." [Final Frontier Design's Space Suit Experience in Photos]

Southern announced the new spacesuit venture during an invite-only event on a rooftop at the Brooklyn Navy Yard Thursday evening (Aug. 28). A group of about 40 people sipped beers, took in scenic views of Manhattan, snapped selfies while wearing spacesuit helmets and even tried out a spacesuit gloves in a vacuum chamber during the event.

Brienna Henwood, the director of space training for the NASTAR Center was on hand to demonstrate the ins and outs of the spacesuit in Brooklyn.

"I train future astronauts," Henwood told the crowd after her demonstration. "That's what I do at NASTAR Center, so I've been working with Final Frontier because they have very unique designs for spaceflight. There are going to be all types of people going to space. You, me, everybody will now have the chance to see space for the first time in history and that is amazing."

The spacesuit experience is designed for people that can't necessarily afford the $250,000 price of a ticket on Virgin Galactic's SpaceShipTwo, but still want to see what it's like to have a little taste of spaceflight, Southern added.

The spacesuit experience starts off with a short presentation about the history of spacesuits given by Southern's partner, Nikolay Moiseev, an engineer with a 21-year history working in human spaceflight.

Then, it's time to suit up.

Moiseev and Southern help the participant don the spacesuit and pressurize it, then the wearer can bounce around, swing a golf club and see what it feels like to be attached to a tether while in a contained environment. Suited up space fans can also take a "hero shot" with an American flag after getting accustomed to the suit experience.

Final Frontier Design also has a special flight simulator set up for adventurous would-be astronauts interesting in trying to fly a fake plane on the Earth or moon.

Moiseev and Southern teamed up and won second prize of $100,000 in a 2009 NASA challenge that asked private builders to create a more maneuverable glove for a spacesuit.

But Southern and Moiseev come from very different backgrounds. Moiseev, who originally hails from Moscow, Russia, worked as a spacesuit designer for many years before traveling to the United States. Southern is an artist by training and got into spacesuit design through his fascination with extending the abilities of the human body.

The partners took their $100,000 award and started Final Frontier Design. At the moment, they are on the third version of their spacesuit, which they hope private spaceflight companies will be interested in purchasing.

"I don't really expect somebody going through the suit experience to say, 'Yes, I want one; $65,0000, no problem,'" Southern said. "In terms of a customer to really buy the suits, we're looking at launch providers and training companies. There's a whole host of them that are interested, and we're currently working on a couple."

To learn more about Final Frontier Design's Space Suit Experience, visit: http://www.finalfrontierdesign.com/spacesuitexperience/. The experience is currently limited to US citizens and US permanent residents.