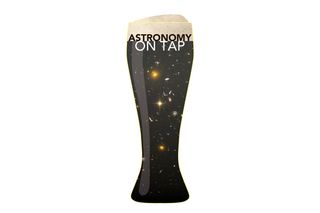 NEW YORK — Drawing a crowd for a lecture on astronomy isn't easy — unless, of course, you have alcohol on your side.

That's where Astronomy on Tap comes in. The group of outgoing astronomy enthusiasts brings cosmic science to the people by explaining complex astronomy topics in clear, concise presentations and liquoring up the audience.

The Way Station — a bar that served as the venue for the group's Aug. 14 event — was appropriate for discussions of space and time. The bar sports a "Doctor Who" theme, right down to a bathroom that imitates the famous time-traveling TARDIS. [Learn more about time travel]

The Astronomy on Tap presentations for Aug. 14 dove into everything from brown dwarfs to clusters of galaxies. Emily Rice (perhaps better known as DJ Carly Sagan), co-undergrad chair and professor at CUNY College of Staten Island, kicked off the festivities by introducing the four presenters for the evening and assuring attendees that the presentations would have much more swearing and drinking than a traditional astronomy lecture.

Stephanie Douglas, a grad student from Columbia University, spoke about brown dwarfs in a lecture entitled "Mind the Gap Between Stars and Planets."

Last year, astronomers discovered the "planet" HD 106906 b orbiting a star approximately 300 light-years from Earth, Douglas said. Since HD 106906 b is 560 times as far from its star as the Earth is from the sun, astronomers were perplexed as to how such a planet could form. Douglas explained that HD 106906 b is likely not a planet at all, but rather a brown dwarf — a small star somewhere between 10 and 90 times as massive as Jupiter that does not fuse hydrogen and, therefore, does not shine very brightly.

The next lecture came from Camille Avestruz, a grad student at Yale University. Avestruz's talk, "Galaxy Clusters: Tools for Cosmology," discussed some of the largest bodies in existence. Galaxy clusters, Avestruz said, are the largest gravitationally bound objects in the observable universe.

Gravity causes entire nearby galaxies to fall toward one another — and even sometimes merge with one another — but the galaxies rarely, if ever, collide with destructive results. This may be thanks to dark energy, a mysterious repulsive force that seems to counteract gravity (but not enough to ever force the clusters apart). Scientists also think that dark energy is responsible for the accelerating expansion of the universe.

Alyson Brooks, an assistant professor at Rutgers University, spoke about "Using Supercomputers to Simulate State-of-the-Art Realistic Galaxies." Brooks explained how astronomers classify galaxies based on their shapes: spiral (like the Milky Way), elliptical or irregular.

Brooks said it takes about three to six months for a supercomputer to simulate a galaxy, but she doesn't need information about the kind of matter contained therein to do that calculation. Ordinary matter, Brooks said, constitutes less than 5 percent of a galaxy's mass, and her results are incredibly realistic  (her simulation of the Milky Way matched the real thing almost exactly, for example) using only projections for dark energy and dark matter (an unexplained substance that accounts for about 27 percent of a galaxy's mass), she said.

The final lecture, "All You Need Is Light," came courtesy of Renée Hlozek, a postdoc at Princeton University. Hlozek's lecture was long and covered a lot of ground, but her central point was about how astronomers can learn about stars by analyzing the light that comes from them.

Spectral analysis of a star reveals both its age and its temperature, and a star's temperature is related to its luminosity. By measuring luminosity, astronomers can even learn whether a star has any satellites, as an orbiting planet will change a star's luminosity by a few percentage points.

It's often difficult to tell whether a star is very bright or merely very close, which is why astronomers use "standard candles," or astronomical objects with known distances and luminosities, to gauge more mysterious findings.

In breaks between the lectures, Rice kept the audience engaged with astronomy trivia. Irene Pease, who runs a website called the Friendly Neighborhood Astronomer, also showed up, large telescope in tow, to wow stargazers with views of the double star Albireo.

Check out the Astronomy on Tap website to see where its astronomers will show up next.

Marshall Honorof is a staff writer for Tom's Guide, a sister site of Space.com. Contact him at mhonorof@tomsguide.com. Follow him @marshallhonorof and on Google+. Follow Space.com @Spacedotcom. We're also on Facebook and Google+. Original article on Space.com.