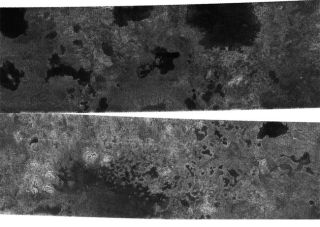 One of the major goals of NASA's Cassini mission was to find lakes or seas on Saturn's moon Titan.

These are not bodies of water like those on Earth, but rather dark lakes of methane and possibly ethane. They are likely the source of the hydrocarbon smog in the moon's atmosphere that has long made it impossible to even see the surface.

Several dark patches, some with channels running out of them, were spotted near Titan's north pole during a July 22 Cassini flyby, NASA said in a statement yesterday.

"This is a big deal," said Steve Wall, deputy radar team leader at NASA's Jet Propulsion Laboratory. "We've now seen a place other than Earth where lakes are present."

This was Cassini's first look at the region. Its radar, which penetrates the smog, was used to find several dozen lakes ranging from less than a mile wide to one that is about 62 miles long.

"What we see is darker than anything we've ever seen elsewhere on Titan. It was almost as though someone laid a bull's-eye around the whole north pole of Titan, and Cassini sees these regions of lakes just like those we see on Earth," said Larry Soderblom, Cassini interdisciplinary scientist at the U.S. Geological Survey, Flagstaff, Ariz.

On radar, dark areas indicate smoother terrain. These apparent lakes are so dark that the scientists assume they must be liquid. Any water on Titan would be constantly frozen, however, so the assumption is these lakes are made of hydrocarbons, which can stay liquid at much colder temperatures.

The shapes of outflow channels strongly suggest liquid carved them, the researchers say.

"We've always believed Titan's methane had to be maintained by liquid lakes or extensive underground 'methanofers,' the methane equivalent of aquifers," said Jonathan Lunine, a Cassini scientist at the University of Arizona. "We can't see methanofers but we can now say we've seen lakes."

Lakes should change shape slightly with the seasons, and winds ought to roughen their surfaces, so future passes by Cassini will look for these effects.

Other Cassini observations have revealed apparent river channels elsewhere on the moon, as well as shorelines that might represent lakes or seas. Scientists say the moon likely experiences methane rains.

But most observations, until now, have not shown conclusively that the methane exists in large quantities in liquid form now.

Cassini has been observing Saturn and its moons and rings since it arrived there two years ago. It is a cooperative project between NASA, the European Space Agency and the Italian Space Agency.