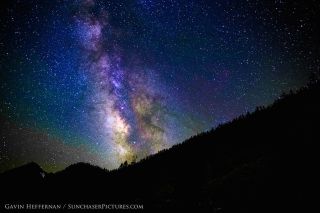 California's Sequoia and Kings Canyon National Parks host some of the nation's biggest trees and tallest mountains. But the side-by-side parks in a remote corner of the Golden State also preserve some of the most dramatic views of the night sky.

"It was undoubtedly one of the most beautiful places I've ever seen, with incredible canyons, mountains and vistas out of a fantasy novel," Heffernan said in an email. "Far removed from any light pollution, the skies were equally stunning." [Stunning Night Sky Photos for September 2014]

KINGS from Sunchaser Pictures on Vimeo.

Heffernan said he was able to take some spectacular shots of the Milky Way, star trails and "the biggest meteorite picture I've ever captured" — all against the backdrop of deep marble canyons and the silhouettes of huge trees and mountains.

As Heffernan noted, the naturalist John Muir called the majestic landscape around the canyon of the Kings River "a rival to Yosemite," which lies further north.

Inside Sequoia National Park, the world's largest tree, the General Sherman Tree, which is thought to be more than 2,000 years old, soars 275 feet (83.8 m) above the ground, while Mount Whitney, the tallest mountain in the continental United States, rises 14,491 feet (4,417 meters). Heffernan said he focused on the Mineral King valley and Zumwalt Meadows area of the parks.

In another video, Heffernan shows what kind of work it takes to set up a camera to make dramatic time-lapse shots in a forest setting that he says evokes "Return of the Jedi." Heffernan even has a close encounter with a brown bear that stumbled onto his shoot.