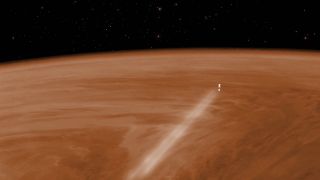 Venus Express rises again! The European Space Agency spacecraft, which has been orbiting our cloud-covered neighboring planet since 2006, recently performed a risky — yet successful — aerobraking dip into Venus’ upper atmosphere in an attempt to scoop some extra data as the end of its operational life approaches.

ANALYSIS: Venus Probe Will Dive to Its Death

After its scientific mission concluded on May 15, Venus Express' orbit was allowed to drop, bringing the spacecraft to as low as 129 km (80 miles) above the planet's broiling, pressure-cooked surface. That's only about a third of the average altitude that the International Space Station (ISS) orbits Earth! [The 10 Weirdest Facts About Venus]

This is the farthest any human-made spacecraft has descended into Venus' atmosphere since the two Soviet Vega missions in 1985.

"We have explored uncharted territory, diving deeper into the atmosphere than ever before," said Håkan Svedhem, ESA's Venus Express project scientist. "We've measured the effects of atmospheric drag on the spacecraft, which will teach us how the density of the atmosphere varies on local and global scales."

During its descent Venus Express measured a thousandfold increase in atmospheric density from 160 down to 130 km (100 to 80 miles) in altitude, as well as solar panel heating of over 100 degrees Celsius (212 degrees Fahrenheit). Additional fluctuations in velocity were measured between the planet’s day and night side.

The data gathered by Venus Express will be used to help plan future exploration missions.

Having survived its "sky surfing" session, a series of burns will now be executed to bring Venus Express up to a higher orbit. Still, its fuel reserves are running out and even if it does make it up to its new altitude Venus Express, after more than eight years and 3,000 orbits, will begin its gradual but inevitable descent back down into the planet’s searing and corrosive atmosphere.