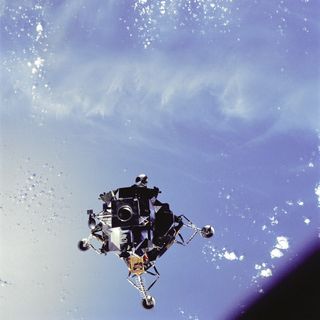 The Apollo 9 Lunar Module is seen from the command module during the Apollo 9 earth-orbital mission.
(Image: © NASA/David Scott)

In this historical photo from the U.S. space agency, a view of the Apollo 9 Lunar Module "Spider" in a lunar landing configuration, as photographed form the Command/Service Module on the fifth day of the Apollo 9 earth-orbital mission. The landing gear on the Lunar Module has been deployed. Note Lunar Module's upper hatch and docking tunnel.

The EVA foot restraints known as the "Golden Slippers" are visible on the porch of the Lunar Module (LM). They allowed Lunar Module pilot Russell "Rusty" Schweickart to securely stand on the porch during his EVA thus allowing him free use of his hands.