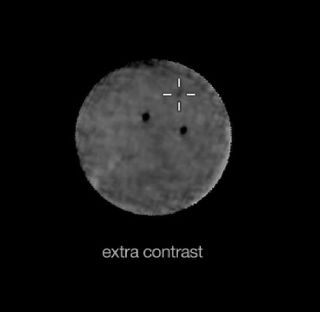 This contrast-enhanced view shows an image of Mercury (indicated by white bars) crossing the sun's face, as seen by NASA's Mars rover Curiosity on June 3, 2014. Also visible are two sunspots, both of which are about as big as Earth.
(Image: © NASA/JPL-Caltech/Malin Space Science Systems)

NASA's Mars rover Curiosity has photographed Mercury crossing the face of the sun, marking the first time such a planetary "transit" has ever been imaged from the surface of a planet other than Earth.

Mercury appears as a fuzzy dark spot in the images, filling just one-sixth of a pixel. Also visible are two sunspots about the same size as Earth, which are moving much more slowly than Mercury. (The sunspots are traveling at the speed of the sun's rotation, while Mercury is racing past by comparison.)

Much of the world was treated to a spectacular Venus transit in June 2012, the last one visible from Earth until 2117. The next Mercury transit visible from our planet will take place in May 2016.

Transits of Venus and Mercury are visible more often from Mars than they are from Earth, NASA officials said. The next Mercury transit that Curiosity could observe will come in April 2015, and the 1-ton rover could see a Venus transit if it survives until August 2030.

And if a Mars colony is up and running in November 2084, Red Planet settlers could see Earth cross the face of the sun.

The Curiosity rover landed on Mars in August 2012 to determine if the Red Planet could ever have supported microbial life. The mission has answered that question in the affirmative, finding that a site called Yellowknife Bay was a habitable lake-and-stream system billions of years ago. Curiosity is now trekking toward the base of a huge mountain called Mount Sharp, which has long been its ultimate science destination.