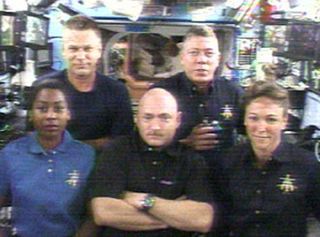 HOUSTON - Now into their eight day inorbit, the six-astronaut crew of the shuttle Discovery has passed the midpointof their spaceflight while one spaceflyer is justbeginning his mission aboard the International Space Station (ISS).

NASA's STS-121astronaut crew, commanded by veteran shuttle flyer StevenLindsey, and newly arrived ISS crewmember ThomasReiter are pushing ahead with tasks to transfercargo between the station and Discovery as they prepare for one lastspacewalk and one last heat shield inspection before heading home.

Many ofDiscovery's astronauts are confident that the performance of their spacecraft,the healthof its heat shield and the success of its fueltank changes are a signal that NASA can resume construction flights to theISS.

"I think mybrother put it very well," Discovery pilot MarkKelly told the Associated Press. Kelly's identical twin brotherScott is also an astronaut and commander of NASA's STS-118 shuttle flight nextyear. "I spoke to him on the IP phone and he said, 'We're back baby.'"

Discovery'sSTS-121 spaceflight is NASA's second shuttle test mission since the 2003 Columbia accident, and isaimed at completing many of the return to flight objective begun by last July'sSTS-114 flight aboard the orbiter. The spaceflight launchedon July 4 and returned the ISS to its three-person capacity for the first timesince the accident by transporting Reiter to the orbital lab. Kelly and some ofhis crewmates spoke with the Associated Press and USA Today duringa space-to-ground link Tuesday.

STS-121mission specialist Lisa Nowak, who is making her first spaceflight aboardDiscovery, said she hopes the mission will clear the shuttle for ISS assemblyflights. Nowak and crewmate Stephanie Wilson will conduct a final round of heatshield inspections after undocking from the ISS on Saturday to scan for anydamage from micrometeorites or debris.

"Theshuttle, in a way, is always a test vehicle, every flight is a test flight,"Nowak told USA Today. "After this flight, I think it will be ready togo."

Most ofDiscovery's STS-121 astronauts - as well as Reiter and his fellow ISSExpedition 13 crewmembers - are working to fill a cargo module full of trash,unneeded or unnecessary items for the return trip to Earth. The Italian-builtmodule - dubbed Leonardo - rode inside Discovery's payload bay during theflight to resupply the ISS.

But twoshuttle flyers - STS-121 mission specialists PiersSellers and Michael Fossum - are gearing up for their thirdand final spacewalk of the flight. The two astronauts will step outside thespace station's Quest airlock and spend more than six hours testing a heatshield crack repair method inside Discovery's payload bay.

"Piers andI and the rest of the crew have a lot invested in it," Fossumsaid of the test.

The crewalso apparently has a bit of quick thinking to do each morning, when flightcontrollers wake the astronauts up with music carefully chosen for a specificastronaut.

"Sometimeswe know ahead of times what the music is going to be, and sometimes it's asurprise," Kelly said with a smile. "And you have to scramble out of your bedto make some profound statement."