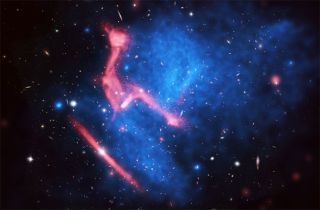 When two clusters of galaxies collide, vast regions of space are energized by powerful shock waves, ripping through intergalactic gas and dust, triggering bright emissions across the electromagnetic spectrum. But what if four (yes, four!) galactic clusters slammed into one another?

In new observations captured by the NASA/ESA Hubble Space Telescope , NASA's Chandra X-ray space observatory and the Karl G. Jansky Very Large Array (VLA), the complex violence of a galactic cluster four-way has been recorded 5 billion light-years distant and astronomers don’t yet fully understand what they are witnessing.

In this stunning composite image described Tuesday (June 3) at the American Astronomical Society's meeting in Boston, Mass., the blue glow represents hot intergalactic gases emitting X-ray radiation as seen by Chandra. But the red wiggly structure threading through the vast cloud of colliding galaxies — which represents intense radio wave emissions as recorded by the ground-based VLA — is something of a conundrum. [Amazing Images from the Chandra X-Ray Observatory ]

"The complex shape of this region is unique; we've never spotted anything like this before," said Reinout van Weeren, an Einstein Fellow at the Harvard-Smithsonian Center for Astrophysics. "The shape probably is the result of the multiple ongoing collisions."

It is thought that the wiggly radio wave emitting structure is being formed by monstrous shock waves blasting through the intergalactic medium, accelerating the hot gas and dust. As these energized particles interact with the intertwined magnetic fields that are undoubtedly threading through the clusters, intense radio emissions are generated. This structure is therefore most likely magnetic in origin, but more research is needed to fully understand its nature.

In addition to this phenomenon, other radio emissions can be seen. The red straight line just below the wiggly structure is a foreground galaxy whose central black hole is blasting out two elongated jets of radio-bright material light-years through space. The other red structure in the bottom left is a radio galaxy that is likely falling into the colliding clusters' immense gravitational well.

According to a press release issued by VLA astronomers, the vast colliding region is called MACS J0717+3745, a region that also falls inside one of Hubble's Frontier Fields, a patch of sky that the space telescope is currently studying to attain the deepest ever observations of the Cosmos, so we can expect more unprecedented detail of this exciting collision region for some time to come.

For more on this fascinating cluster smash-up and high resolution imagery, browse the VLA news release.