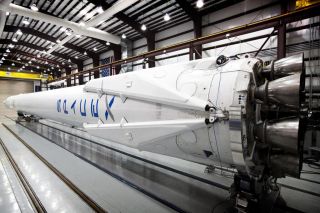 A close-up look at the landing legs on a private SpaceX Falcon 9 rocket launching from Cape Canaveral Air Force Station, Fla., on April 14, 2014. The Falcon 9 rocket will launch a Dragon cargo ship to the International Space Station, then attempt to return its first stage to Earth in a reusable rocket technology demonstration.
(Image: © SpaceX)

In December, Denver-based ULA and the Air Force reached contractual terms for the first batch of rockets in a long-awaited bulk purchase, one the service said is the heart of its strategy for saving money on its overbudget launch services program.

Original plans for the block buy called for the Air Force to buy 36 rocket cores from ULA on a sole-source basis while putting another 14 missions for bid, thereby giving so-called new entrants such as SpaceX a crack at the market. The new entrants first must earn certification to launch national security missions, which in SpaceX's case is expected in late 2014 at the earliest. [The Rockets and Spaceships of SpaceX (Photos)]

The Air Force recently deferred roughly half of the missions to be competitively awarded, this after ordering the first batch of rocket cores from ULA, currently the sole provider under the service’s Evolved Expendable Launch Vehicle program. As such, ULA has enjoyed a virtual lock on the U.S. national security launch market.

In recent weeks, Musk, along with SpaceX supporters in Congress, have pushed the Air Force to rethink the block-buy strategy. By filing the claim — one of several ways to protest a contract — SpaceX will now receive a judicial review of Air Force’s decision. The court has the power to issue an injunction that would at least temporarily stop the block buy in its tracks.

Specifically, Musk said, Hawthorne, Calif.-based SpaceX is protesting only a share of the rockets — those which it currently has the ability to launch. That effectively exempts a number of missions, including any that would be launched on ULA's Delta 4 Heavy rocket.

SpaceX recently acknowledged that it currently is capable of launching 60 percent of Air Force missions, a figure that is expected to climb to 100 percent once the company's planned Falcon Heavy rocket is up and operating.

"We actually only learned about the big sole-source award in March," Musk said. The contract "may have been signed in December, but it only came to light, interestingly, only one day after the Senate hearing on EELV launch costs. I don't think that's an accident. We've really just had about a month of awareness. We’ve been somewhat reeling from that news."

Gen. William Shelton, commander of Air Force Space Command, has insisted that the service has already locked in $4.4 billion in savings through the block-buy strategy, but that figure has been greeted with skepticism in some quarters.

Nonetheless, canceling the existing contract would be expensive. In an April 3 hearing of the House Armed Services strategic forces subcommittee, a Defense Department official estimated that the cost would be at least $370 million.

In addition, scrapping the block buy would force the Defense Department to negotiate on a mission-by-mission basis for access to space, thereby driving up costs on a per-launch basis, officials said.

Elon Musk has recently won support from key lawmakers in his quest for the chance to compete for more launches.

Tom Mentzer, a spokesman for Sen. Dianne Feinstein (D-Calif.), who chairs the Senate Select Committee on Intelligence, has said the senator believes any launch that a new entrant is capable of performing "should be competed as soon as possible."

In an April 25 email, Mark Bitterman, ULA's vice president of government affairs and communications, said the company was reviewing the transcript of the press conference.

"ULA is proud and focused on supporting the AF EELV Program for the Department of Defense missions that assure that critical capabilities are delivered to space successfully on schedule," he said. "The block buy contracting process was formally started in late 2011, with proposals delivered in 2012, and final contract signed in 2013. The DOD robust acquisition and oversight process and ULA improved performance enabled over $4 billion in savings as compared to prior acquisitions approaches. ULA recognizes the DOD plan to enable competition and is ready and willing to support missions with same assurance that we provide today."

This story was provided by SpaceNews, dedicated to covering all aspects of the space industry. Follow Mike Gruss on Twitter @Gruss_SN and Dan Leone @Leone_SN.