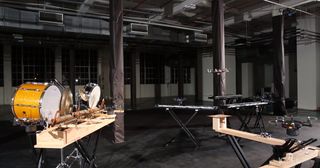 In a futuristic symphony that not even Stanley Kubrick may have envisioned, a phalanx of flying robots plays the theme song from the late director's classic film "2001: A Space Odyssey."

The tiny drones play a variety of specially rigged musical instruments — including drums, guitar and keyboard — during their performance of the famous song, a Richard Strauss work called "Also Sprach Zarathustra." The robots then show their versatility, ringing out the holiday tune "Carol of the Bells" and playing the "Star Spangled Banner," among other songs. You can watch the entire four-minute concert here.

"These robots represent a significant technological advancement because of their six propellors; most agile flying robots use only four," video producer and director Kurtis Sensenig told Space.com via email. "This may be the first time such a large swarm of hexrotors (named for the number of props) have flown in synchronization."

The flying robots first became famous in 2012 after a video showed them playing the James Bond Theme. The new video, released on Tuesday (April 22), was created by the same crew and represents two more years of technological development, Sensenig said. The flying robots will perform live at the USA Science & Engineering Festival on Saturday and Sunday (April 26 & 27) in Washington, D.C.‪