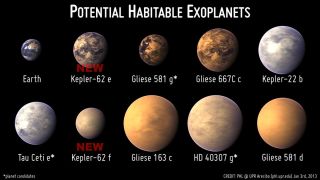 Artist depictions of so-called “habitable exoplanets” are not precise portrayals of what the planet looks like, but are best-guesses based on available data.
(Image: © PHL@UPR Arecibo)

The "most Earthlike exoplanet" rankings will have to be revised.

Today (April 17), astronomers announced the discovery of Kepler-186f, the first truly Earth-size alien planet ever found in a star's "habitable zone" — that just-right range of distances where liquid water could exist on a world's surface.

Kepler-186f is a rocky world just 10 percent bigger than Earth that lies 490 light-years away. It's the outermost of five planets known to orbit Kepler-186, a red dwarf star that's considerably smaller and dimmer than our own sun. More than 70 percent of the Milky Way's 100 billion or so stars are red dwarfs. [9 Exoplanets That Could Host Alien Life]

The Planetary Habitability Laboratory, run by the University of Puerto Rico at Arecibo, maintains a database of all exoplanets that may be capable of hosting life as we know it. Here's a quick look at the other worlds in PHL's top five (assuming Kepler-186f claims the first spot):

This "super-Earth" is at least 3.9 times more massive than our own planet. It orbits the red dwarf Gliese 667C, which is part of a three-star system that lies 22 light-years away, in the constellation Scorpius.

Gliese 667Cc completes one lap around its parent star every 28 days. The planet has one confirmed neighbor, a world called Gliese 667Cb. But astronomers have spotted five additional planet candidates orbiting the star as well.

As its name suggests, Kepler-62e was discovered by NASA's Kepler space telescope. About 1.6 times more massive than Earth, the planet lies about 1,200 light-years away, in the constellation Lyra. It completes one lap around its parent red dwarf every 122 days.

Kepler-62e is one of five planets known to orbit the star Kepler-62. Researchers think Kepler-62e and its potentially habitable neighbor, Kepler-62f, are "water worlds" — warm places mostly or completely covered by liquid water.

Another Kepler find, Kepler-283c is about 1.8 times bigger than Earth and completes one orbit every 93 days.

The planet is one of two worlds known to circle the star Kepler-283, which is just over half as wide as Earth's sun. The other planet in the system, Kepler-283b, lies much closer to the star and is thus probably too hot to host life..

Kepler-296f is one of 715 confirmed planets just announced in February by the Kepler mission team. The spacecraft has spotted 3,845 potential planets, with 961 confirmed by follow-up observations or analysis. Mission officials expect that about 90 percent of Kepler's detections will turn out to be the real deal.