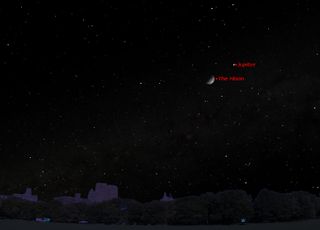 Jupiter will shine near the moon the night of Sunday, April 6, 2014. This sky map shows the location of Jupiter and the moon in the southwestern sky at 11 p.m. local time, as viewed from mid-northern latitudes.
(Image: © Starry Night Software)

Weather permitting, when you step outside Sunday evening (April 6) you have a chance to see a rendezvous of two of the brightest objects in the night sky: the moon and Jupiter.

The eye-catching celestial duo will be visible in the southwest sky about 45 minutes after sunset, roughly two-thirds up from the horizon to the point directly overhead (called the zenith). The moon, which will be mere hours from reaching first-quarter phase — 47-percent illuminated by the sun — will be situated below and to the right of Jupiter, a distance of roughly 5 degrees. To gauge how wide 5 degrees is, your clenched fist held at arm's length measures about 10 degrees, so Jupiter and the moon will appear roughly "half a fist" apart.

Even without the moon, Jupiter alone readily attracts attention. The planet is the brightest "star" for the time it's above the horizon (it currently sets at around 2:15 a.m. your local time), and first comes into view high in the southwest sky during the early stages of twilight. Jupiter, at about magnitude negative 2.2, outshines everything in the night sky except Venus and the moon. [Best Night Sky Events of April 2014: Stargazing Guide]

As twilight fades, Jupiter is soon joined by the bright winter stars in this part of the sky — stars that are beginning to seem out of season as spring evenings warm up.

How soon after Jupiter appears can you spot these stars? Stretch your hand wide, hold it at arm's length and look past it. One hand span from thumb tip to little-finger tip is about 20 degrees. Using this measure, look about 30 degrees to Jupiter's right for the yellowish star Capella, 21 degrees to its left for yellow-white star Procyon and 40 degrees to its lower left for bluish Sirius, the brightest star in the night sky. Orion is roughly 20 degrees below Jupiter. The orange star Aldebaran lies about 35 degrees below and to the right. Yellowish Pollux and white Castor are 12 degrees above the planet.

Examine the stars for their colors. Do they seem more pronounced against a twilight sky than in darkness?

In a telescope, Jupiter is a prime attraction, and best observed during early evening, when it's still high in the sky. It appears only three-fourths as big as it did when it stood exactly opposite of the sun in early January, but don't let that stop you from checking it out. The quirks of atmospheric seeing, which can change from minute to minute, often determine what a telescope will show on Jupiter more than the planet's apparent size. And its four bright moons are always performing.

In fact, if you look at Jupiter with a small telescope, or even steadily held binoculars, on Sunday evening, you'll see the luminous moons stretched out on one side of Jupiter. Closest to Jupiter will be Io, followed by Ganymede, Europa and finally Callisto.

If you live in the western United States or western Canada, however, you'll likely see only three satellites. That's because at 7:51 p.m. PDT (10:51 p.m. EDT) — in bright twilight — Io will cross in front of Jupiter, a motion known as a transit.

On Sunday, while you enjoy the sight of Jupiter near the moon, keep in mind that with only slight optical aid, up to four more satellites can be seen. They seem like small stars, though two of them are really larger than Earth's moon, and it is indeed possible to watch them change their positions relative to each other from hour to hour and night to night.

Editor's note: If you take an amazing skywatching photo of the moon and Jupiter or any other night-sky view, and you'd like to share it for a possible story or image gallery, please contact managing editor Tariq Malik at spacephotos@space.com.